“I never wanted to just do gimmick. That would just happen with me being a porn star, me having a photographer shoot the label, how risque could I get on the label — all those things,” Samson, the stage name for 31-year-old Natalie Oliveros, said in an interview.
The seriousness of the idea was lining up a respected wine maker. So she convinced Italy’s Robert Cipresso — also a vintner to the
Vatican — to join the project.
Samson went to Tuscany and tasted dozens of Cipresso’s Italian-grown varieties, then she selected a mix of 70 percent Cesanese, 20 percent Sangiovese and 10 percent Montepulciano. She ordered over 400 cases.
“I knew I wanted Roberto to make my wine — I just love his passion for wine,” said Samson.
The result is Sogno Uno, a 2004 vintage of an Italian red wine packaged under the Savanna name with a label of Samson in a see-through gown. It was launched last month.
Parker has been called the most influential wine critic in the world, and a score of 90 to 95 denotes “an outstanding wine of exceptional complexity and character.”
“Trust me, I didn’t add any points for Ms. Samson’s personal presentation,” Parker wrote in his review.
NAUGHTY AND SPICE
Samson is one of the biggest names in pornography, having won best actress in the Adult Video News Awards (AVN), the pornographic equivalent of the
Oscars, and another AVN Award for a scene she shared with Jenna Jameson in last year’s “The Masseuse.” She has made two dozen porn flicks.
The wine “really represents who I am,” said Samson.
“There’s spiciness — the Cesanese has the naughty side of me. And yet it’s an elegant wine. I love the opera, and I’m a classically trained ballet dancer. And there is some chocolate undertone, which I just love. There’s a little bit of sweetness. Like, 10 percent of the time I’m sweet,” she said.
She is working on a white wine — Sogno Due — that could be out later this year, and also has ideas of expanding into champagne, ice wine and grappa.
Samson, who was raised Catholic in upstate New York, said it was pure coincidence that Cipresso also sells wines to the Vatican. She met him through her husband, a wine merchant.
“My priest said in Mass once, ‘Violence or pleasures of the flesh. What is the greater of two evils?’ I think we all know the answer. I felt like he was saying that toward me,” she said.
Still, she never had her parent’s blessing for her career choice as an adult movie star. “They were so devastated. They were terribly, terribly upset.”
But while she will continue her film career, wine-making may offer some redemption. “I wanted to do something that my parents could be proud of,” she said. 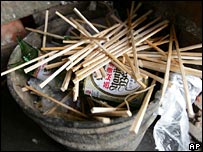