Okay…for those of you who haven’t lived here… I would almost gaurantee that the alleged thief is the nephew, cousin, or son of someone in the Honolulu Police Department. This couple should be given a metal for taking care of business and having balls of steel….cd

Police arrested a married couple after they allegedly tracked down a man whom they believed had stolen their vehicle and allegedly threatened and attacked him.
The vehicle belonging to the husband and wife was stolen Wednesday, police said. The couple went to the Kapolei home of a 23-year-old man and confronted him about the alleged theft, police said.
The husband, 44, allegedly threatened the man with a golf club. When the man tried to run away, the wife, also 44, allegedly threw a metal pipe at him.
The pipe struck the man in the back and caused a minor injury, according to police.
Police later arrested the husband and wife for investigation of first-degree terroristic threatening and second-degree assault. 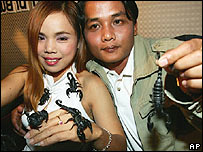