Nothing against you guys hanging with the extra skin still there…but aside from increased incidence of Thrush (yeast infection) among the uncircumcised man, it turns out that losing that bit of skin actually protects your partners too…
cd
DENVER (Reuters) – Male circumcision, which has been shown to protect men from infection with the AIDS virus, appears to protect women, too, U.S. and Ugandan researchers reported on Wednesday.
Circumcising men reduced infections in their female partners by 30 percent, the researchers found. One said the difference may be related to the structure of the foreskin, which is removed in circumcision.
In the study of more than 300 Ugandan couples in which the man infected the woman, the researchers found that 299 women caught HIV from uncircumcised partners and only 44 were infected by circumcised men.
Circumcision also reduced the risk of infection with other sexually-transmitted diseases such as trichomonas and bacterial vaginosis, but not syphilis, gonorrhea or chlamydia, the researchers told an AIDS meeting in Denver.
Dr. Thomas Quinn of Johns Hopkins University in Baltimore has been leading a team that studies 12,000 volunteers in Rakai, Uganda. They have been studying transmission of the human immunodeficiency virus that causes AIDS.
Last year they reported that circumcised men were less likely to become infected with HIV. Now, they told the Conference on Retroviruses and Opportunistic Infections, it appears that among infected men, circumcision reduces the likelihood they will transmit the virus through sex.
They also presented more evidence that circumcision protects men. They reanalyzed previous studies and found that circumcision reduced the risk of HIV infection in men by 50 percent — and by 70 percent in the highest-risk men.
The findings will have to be confirmed in other groups before being used as the basis for recommendations, Quinn said. However, he said, “early indications are dramatic.” If borne out, for every 15 to 60 circumcisions, one case of HIV infection could be prevented, he said.
Circumcision’s benefits may stem from the structure of the foreskin of the penis. Its inner lining, or mucosa, carries cells that are vulnerable to the AIDS virus.
“Also that mucosal layer does not have the thick keratin (skin) that the outside skin of the foreskin has,” Oliver Laeyendecker, who worked on the study, said in an interview.
“Not only do you have more virus there because of the types of cells that are there, but the barrier is easier to go through from the man to the woman on that skin surface because it doesn’t have to go through a lot.”
The AIDS virus is transmitted by semen, blood and breast milk and via sex, shared needles or other contacts with infected blood.
Semen can transmit the virus, but levels in the semen drop over time, while remaining elevated in the blood, Laeyendecker said.
The theory is that the virus can pass in tiny amounts of blood in the foreskin. “Because of the nature of that membrane, because it is thin, because it is susceptible to micro-tears, you have a lot of openings,” Laeyendecker said.
“Plus you have more cells with virus there, so it lends itself to being a more transmissible surface.”
The AIDS virus infects close to 40 million people globally, most of them in Africa. It kills 3 million people a year and infects 5 million new people every year.
It is eventually fatal and there is no cure or vaccine, although drug cocktails can keep patients healthy for years. Laeyendecker said the Uganda volunteers have access to at least some of the drugs through a U.S. program. 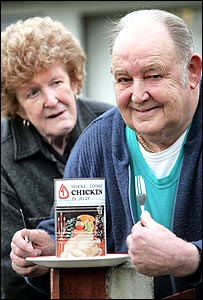