for some reason this seems cruel to me…
cd

SHREVEPORT, La. – It’s both a surprise and a mystery. At Caddo Parish’s Chimp Haven, where retired male chimpanzees all get vasectomies, a female chimp has turned up pregnant. Chimp Haven managers knew something was up when they could not find one of their chimps last week.
Teresa, who’s been at Chimp Haven for the past year and a half, was missing during the morning rounds. Later, she appeared with a newborn chimpanzee in her arms.
“Well, we were all just a little bit surprised when we heard the news,” said Linda Brent, a spokeswoman for Chimp Haven.
Teresa was in a group with 17 other chimpanzees — seven of them males.
Now Chimp Haven will have to determine paternity. “We’re going to be doing a paternity test, just like you would do on people,” Brent said.
Workers have started collecting hair samples from the chimps for testing. Once they identify the father, it’s back to the operating room for him.
The baby chimpanzee was named Tracy and she and her mother are doing fine, Brent said.
Teresa, who is in her 40s, had 10 other offspring before retiring to Chimp Haven. This is her first in 13 years.
It’s also the first chimpanzee born at the sanctuary although officials there hope there will be no more accidents.
Teresa and her daughter will not be separated. Chimp Haven supporter Bill Robinson is sponsoring her so she can spend her life with her mother at the sanctuary, officials said.
___ 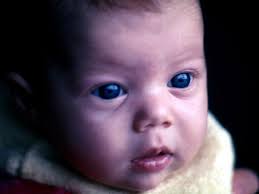 Reflections on our Inner Bush….