(Personally, I think he showed incredible restraint. If a bottle comes through my window, watch what happens….Semper Fidelis…cd)

BOSTON (Reuters) – A decorated U.S. Marine, who had been treated for post-war stress since serving in
Iraq, opened fire outside a Massachusetts nightclub, wounding two people, Boston media reported on Monday.
Daniel B. Cotnoir will be arraigned on Monday on charges of assault and battery with a deadly weapon and assault with intent to murder after the incident early on Saturday in the city of Lawrence, The Boston Globe said.
Cotnoir had complained to police after a crowd of nearly 30 people gathered outside a nightclub and restaurant near his apartment. After someone hurled a bottle that shattered his bedroom window, Cotnoir fired “a warning shot,” the newspaper said.
The bullet hit a 15-year-old girl and a 20-year-old man.
“He shot into what he thought was a safe area, but there was some ricochet effects that Mr. Cotnoir never intended,” his lawyer, Robert F. Kelley, was quoted as saying.
“It was a military-type response to a threatening situation that was civilian in nature.”
Cotnoir, a sergeant awarded the 2005 Marine of the Year by the Marine Corps Times, has been struggling psychologically since returning from Iraq in 2004, Kelley said.
Police were not immediately available to comment. 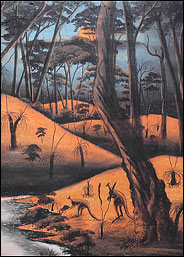