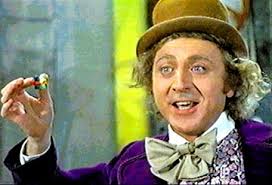 KENOSHA, Wis. – It might sound like a chocoholic’s dream, but stepping into a vat of chocolate became a two-hour nightmare for a 21-year-old man Friday morning.
The man, an employee of a Kenosha company that supplies chocolate ingredients, told police he got into the tank at Debelis Corp. to unplug it and became trapped waist-deep in the chocolate.
“It was pretty thick. It was virtually like quicksand,” said Police Capt. Randy Berner.

Co-workers, police and firefighters tried to free the man but couldn’t get him loose until the chocolate was thinned out. Berner said the worker was taken to a hospital for treatment of minor injuries.

FOUNTAIN VALLEY, Calif. – As a chocolatier to the rich and famous, Martucci Angiano has posed with many celebrities.
But on Thursday she held in her hand a figure that dazzles her more than any Hollywood star: a 2-inch-tall column of chocolate drippings that workers at her gourmet chocolate company believe bears a striking resemblance to the Virgin Mary.
Since the discovery at Bodega Chocolates, Angiano’s employees have spent much of their time hovering over the tiny figure, praying and placing rose petals and candles around it.
“I was raised to believe in the Virgin Mary, but this still gives me the chills,” Angiano said as she balanced the figure in her hand. “Everyone should see this.”
Kitchen worker Cruz Jacinto was the first to spot the lump of melted chocolate when she began her shift Monday cleaning up drippings that had accumulated under a large vat of dark chocolate.
Chocolate drippings usually harden in thin, flat strips on wax paper, but Jacinto said she froze when she noticed the unusual shape of this cast-off: It looked just like the Virgin Mary on the prayer card she always carries in her right pocket.
“When I come in, the first thing I do is look at the clock, but this time I didn’t look at the clock. My eyes went directly to the chocolate,” Jacinto said. “I thought, ‘Am I the only one who can see this? I picked it up and I felt emotion just come over me.
“For me, it was a sign,” she said.
The chocolate, on display for most of the week in the front of the company gift shop, now rests in a plastic case in a back room. It is brought out for curious visitors.
The confection has a wide base and tapers gently toward a rounded top, giving the appearance of a female figure with her head tilted slightly to the right. The dark brown melting chocolate hardened into subtle layers that resemble the folds of a gown and a flowing veil.
A tiny white circle, about the size of a pencil eraser, sits in the upper center of the creation. Cruz said the white speck is the head of the Baby Jesus as he is held in Mary’s folded arms.
For Jacinto, the discovery came just in time.
Raising a son on her own, she has struggled with marital problems for months and said she was about to lose her faith. “I have big problems right now, personally, and lately I’ve been saying that God doesn’t exist,” she said, pulling the dog-eared prayer card out of her pocket. “This has given me renewed faith.”
Angiano, who co-owns the 10-year-old company with her sister, has rubbed shoulders with plenty of stars in her job.
The gourmet boutique runs booths at all the big awards shows, including the Emmys, the Golden Globes, the Oscars, Grammys “The gourmet boutique runs booths at all the big awards shows, including the Emmys, the Golden Globes, the Oscars, the Country Music Awards and the Latin Grammys. Pictures of Angiano with top celebrities — and her chocolates — line the office walls.” />
Pictures of Angiano with top celebrities — and her chocolates — line the office walls.But this week’s brush with the image of a 2,000-year-old idol has left even Angiano star-struck.
“That’s our Oscar right there,” she said.