When I was in Laos, I loved the food. Great bread, lots of tomatoes, and good beer.

To Eat in Laos – New York Times
ROM my seat at an outdoor table at the Café Ban Vat Sene I had a privileged view of the afternoon’s civic unrest. The traffic on the main street of Luang Prabang, Laos’s third-largest city (population 16,000 at its core), had come to a halt. Poised nose to nose in the avenue were a large dog and a bellicose lizard. Children gathered to watch. I clutched a glass of Lao beer as the dog growled and lunged and the lizard leapt at the dog’s snout. When the dog finally began to get the upper hand, the lizard wisely high-tailed it into a bush. The traffic resumed its customary slow pace and I resumed drinking my beer, which, like most food and drink in this town, tasted mighty fine. 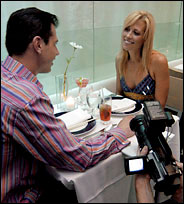