I love this story. When I used to hang out with the bums and have fires on the beach, Two Dog Tom (who I write a bit about in Rough Living) would sometimes get a little stoned and begin to tell tales of Til Uulenspiegel, the German robber/Robin Hood who would always ask his victims to join him in a life of Riley world. The world needs more of this.
cd

Carsten Sievers, the manager of a luxury supermarket in the wealthy Blankenese area of Hamburg, recently watched the robbers run off with trolleys full of expensive foodstuffs, including Kobe beef which, at more than £100 a pound, is always on their illicit shopping list.In another recent swoop, the gang emptied a groaning buffet table in a top restaurant into sacks, while one of their number held up a sign saying. “The fat years are over” – the title of a hit film currently doing the rounds in Germany.In internet statements, the gang have made a point of saying their booty is distributed to Hartz IV recipients – the poorest of Germany’s long-term unemployed. The benefit is named after the disgraced Volkswagen personnel director Peter Hartz who, before he lost his job with the car-maker in a prostitutes-and-bribes scandal, devised the new means-testing which is loathed and derided by society’s most economically challenged.When the gang robbed the gourmet store in April – triggering a massive police investigation that cost £20,000 in taxpayers’ money without an arrest being made – they left a note behind saying: “Without the abilities of the superheroes to help them, it would be impossible for ordinary people to survive in the city of the millionaires.”
Police say they are concentrating their investigation on a loose collective of anarchists and malcontents called “Hamburg in Vain”, to which they believe the superheroes belong. But they admit there is a certain panache and skill about their robberies.
The gang are also behind black market cinema tickets which they distribute free to the poor, and they have printed leaflets telling passengers how to dodge ticket inspectors on the city’s underground and buses.
Mr Franz said: “They try to make crime fun but are politically motivated.” 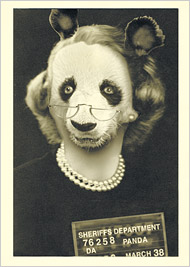