(Thanks to David Stacy for letting me know about this fine new article of his….read it and enjoy….cd)

The NFL sponsored by Ron Jeremey
âYou remind me of my jeep, I wanna ride it. Something like my sound, I wanna pump it. Girl you look just like my cars, I wanna wax it. And something like my bank account, I wanna spend itâ?-R. Kelly
Anyone who knows me knows that I absolutely despise the NFL and everything it stands for. It is without a doubt a monument to all that is rotten in our society: capitalism on a grandiose scale, the win at all cost mentality, living in constant fear of loosing your job, etc. I am in the minority because the NFL is a ratings juggernaut, but itâs not the first time that I have taken an unpopular stance. Other than watching the woeful Detroit Lions on Thanksgiving I boycott the rest of the season.
The NFL claims to be a family friendly organization, but youâd never know it from the off field behavior of the players. The decadence and depravity these heathens display during their free time is enough to make even Caligula blush. It makes a fellow sinner such as I kick myself for not getting involved in football. Oh, now I remember why I didnât play football, I was asked to be an offensive lineman in high school at a mammoth 140 lbs. I wouldâve been lucky to have blocked a strong wind.
Ah, let us get off these senseless high school flashbacks. There is so much lewdness to cover we cannot waste valuable column space. Weâll start out in Dallas, Texas and visit with âAmericaâs Teamâ? the Dallas Cowboys. During their domination of the NFL in the 90âs, the playing field wasnât the only place that the Cowboys ran amok. A number of Cowboys players bought a house that they frequently brought prostitutes and groupies for the sole purpose of fulfilling their carnal desires. They called it the âWHITE HOUSEâ?. Possibly in honor of Bill Clinton, but I canât say that for sure. Nobody objected to the White House because you just donât fuck around with the formula that is bringing in Super Bowl after Super Bowl. I dare say that Jimmy Johnson and Jerry Jones would have condoned Cowboys players sodomizing corpses as long as they could keep winning.
The 90âs certainly was one wicked decade; one just needs to look at the widespread acceptance of pornography and the national support for lusty lothario Bill Clinton. A few loud-mouthed political pundits called for his impeachment but most Americans couldnât give a ratâs ass about Clinton getting his knob polished by a portly secretary. However Green Bay Packers tight end and outspoken Republican Mark Chmura crucified the president because of his sex crazed behavior. Statements like that will win you a lot of friends in the farm belt.
Chmura must believe in the âdo as I say, not do as I doâ? philosophy. While injured Chmura was charged with third degree sexual assault after he got busy with his kidâs 17 year old babysitter on the bathroom floor. And to top it all off the encounter took place after her high school prom. Needless to say the squeaky clean Packers didnât take the news too well and subsequently put the skids under Chmuraâs ass. I hear that he is serving his exile somewhere in eastern Wisconsin.
I just love those cute Campbellâs Chunky Soup adds featuring Donovan McNabb and his mamma? Have you seen them? Theyâre really funny. McNabbâs mom does all kinds of motherly things for Eagles players like knitting gloves, reading bedtime stories, and of course reminding them to eat their Campbellâs Chunky Soup. Most people have forgotten that Denver Broncos running back Terrell Davis was the forefather of the soup commercials. But Campbellâs dropped him like a crack habit when news surfaced that Terrell had a propensity for humping strippers at the infamous Gold Club in Atlanta. Terrell must have been an impatient little bugger because he didnât even take the girls to a hotel; he just had sex right there in the club.
When I heard of this news I didnât see why he couldnât endorse soup anymore. I believe that people who enjoy having sex with strippers are just as likely to buy soup as your aunt Gertrude. If anything I would have eaten the foul tasting soup BECAUSE Terrell was the sponsor. The only negative part of Terrellâs behavior that affected me was that from now on I will not get a lap dance in the VIP room without first getting a towel from security personnel. You never know, Terrell Davis could have been there earlier.
Read the rest at www.stacynet.com
The NFL, Sponsored by Ron Jeremy 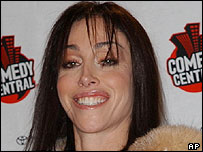