There’s a new Web site called Real People Real Stuff where anyone can post a classified video. As expected, there are plenty of bad quality clips and boring infomercial-type stuff, selling real estate, cars, even Shih Tzu puppies. But there are also some hidden gems.
For instance, some guy in Alexandria, Virginia, wrote a song about his company’s “Dog Guard” invisible pet fence. “We keep your hound aroundddd. We keep your hound aroundddd,” he sings as he strums his guitar and croons.
In another charming and informative video, a Canadian woman illustrates the “lack of integrity” of the street parking meters in Montreal. Basically, anyone can override the system by sticking as little as 5 cents (Canadian obviously) into the meter after someone has already paid for an hour, thus cheating the driver out of the full time and ensuring they get a ticket. Once the minutes allowed for with the 5 cents are up an alarm goes out to the parking cops and they come and ticket the car, without knowing that the driver initially paid more, says the woman. (Listen for her to say “about” which sounds like “a-boot.” Very cute.) It’s an easy and confidential way to get revenge on people, she notes.
In another video, a man says he is selling a stuffed animal — a one-eyed beaver eating wood that he calls a “family heirloom” — because his girlfriend hates it. Not nearly as freakish as the stuffed frogs playing instruments my step-dad has collected, though. 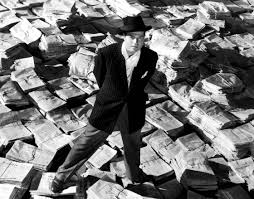