Hawaii has a rich history of conquest, betrayal, love, adventure and romance. That history doesn’t start with the coming of Europeans or even with the uniting of the Hawaiian Islands under the first King Kamehameha – it goes much further back and it is those ancient times when you find the excitement, romance, and adventure. The later kings and queens of Hawaii were fairly domestic in terms of their rule (with the exceptions of King Kalakaua and King Kamehameha). Queen Lilioukalani, of course, was beloved as the last monarch of the Hawaiian Kingdom and because of the injustice done to her and the Hawaiian people in that act and what followed – but the early Kings and Queens – to me –  it was they who truly represent who the Hawaiian people really are – and of course, King Kamehameha I (below) represents incredibly well.

Fierce, loyal, independent, and ambitious….The history of Hawaiian Kings and Queens was transmitted by oral history so in some cases we know almost nothing and in others we have celebrated deeds. Written language didn’t come to the Hawaiian Islands until the 1800’s – at which point most of these monarchs were long gone. I’ve tried to piece together some of the lineages from online sources and Ross Cordy’s excellent Rise and Fall of the Oahu Kingdom – but have certainly made a few errors as there are differing accounts – none of which are backed by written history.

First of all – understand that there were four main islands which all had ali’i nui (monarchs) – Kauai, Oahu, Maui, and Hawaii. Lanai and Kahoolawe were typically under Maui control and Molokai was often under Oahu control though sometimes under Maui and sometimes independent.

The first known King of Oahu was a man named La’akona in about 1400 A.D. His line ruled from ‘Ewa until the 1600s when Queen Kala’imanuia came into power. She was a productive and peaceful Queen who focused on building fishponds and expanding wetland agriculture. Her three sons split the island and some chaos reigned until her grandson Kakuhihewa reunified the island. He was a renowned ruler and ruled from Kailua on the windward side. Four generations after him, the greatest Oahu King came to power. Kuali’i conquered Kauai, Molokai, parts of the Big Island, and attempted to gain control (unsuccessfully) over Maui, Kahoolawe, and Lanai. His eldest son Kumuhonua inherited the Oahu Kingdom. His younger son Moiheka was the King of Kauai. It is possible that his daughter became the kahina nui of Molokai. King Kumuhonua’s descendent Kiing Kahahana, was conquered in 1783 by King Kahekili II of Maui who King Kamehameha acknownledged as his biological father. The legitimate heir of Kahekili II was Kalanikapule – the same who was thrown from the cliffs of Nu’uanu Pali by the conquering King Kamehameha (his half brother) in 1795.

Kahekili II had one side of his body tattooed black so that he would resemble his namesake the Hawaiian God of Thunder (Kane Hekili). Kahekili II was the first great conqueror of Hawaii – he controlled all of the Hawaiian Islands except the Big Island of Hawaii. His conquest of King Kahahana of Oahu was a bloody affair where most of the Oahu royals were executed and their history erased. He had a house constructed of their bones!

When Kahekili II died his brother and son went to war for control. Eventually Kalanikapule was victorious but it left him weakened and his kingdom was conquered by King Kamehameha less than a year later.  Kamehameha himself was said to be a descendent of Umi-a-Liloa, the first monarch to conquer the entire island of Hawaii. He was the son of a beautiful commoner and the high king Liloa. The king had left royal insignia that only those of high birth could possess…the boy was born and his mother hid his identity until the man who thought he was Umi’s father (her husband) was beating the boy, at which point she demanded he stop since the boy was actually his king! From here, Umi traveled to the Waipio Valley where the king lived and presented himself. He found great favor but was regarded jealously by his half-brother who he eventually overcame and made serve him. He married many high ranking women and through diplomacy and war eventually united nearly every district of the Big Island. His descendent Keawe’ikekahiali’iokamoku was the great-grandfather of King Kamehameha. For typing sake, we will refer to him as KIng Keawe.

King Keawe built alliances with all of the Kingdoms on all eight islands and built strong alliances based on marriage to high ranking chiefs and royals. His main problem during his reign was controlling the chiefs of Hilo but through war and diplomacy he managed to keep them from declaring independence. He was the common ancestor of both the Kamehameha and Kalakaua dynasties. 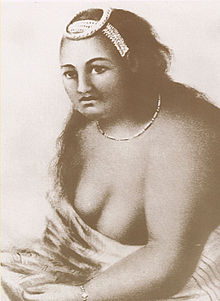 One of the most powerful monarchs in Hawaiian history was also one of the wives of King Kamehameha the great. Queen Regent Ka’ahumanu of Maui was the favorite wife of Kamehameha (he had many) and when he died, she was co-ruler of the kingdom over the next two reigns. It can be argued that not only did she conquer Kauai for him, but she also overthrew the entire religion of the Hawaiian people, and ruled longer than any other monarch. It is said that in private, the kings were forced to bow to her.

She was born in a sacred cave on Maui and died in the Manoa Valley on Oahu.  When Kamehameha I died, she married King Kaumuali’i of Kauai to prevent the kingdom from splintering. She was the mother of Kamehameha II and ruled his kingdom and that of Kamehameha III with an iron fist.  Her lineage was said to be one of the highest in the islands. She was the child of a fugitive prince of Hawaii and a princess of Maui. She married Kamehameha when she was thirteen and from that point pushed her husband to unify the Hawaiian Islands. At his death, she announced that he had wanted her to be co-ruler with the new Kamehameha II (Liholiho) and no one was willing to argue with her.

When Kamehameha II died, she retained power as her step-son Kauikeaouili became Kamehameha III. She was a fierce advocate of women’s rights. She was also a notoriously large woman who broke the kapu (rules) about what women could and could not eat. She singlehandedly overthrew the ancient Hawaiian religion and invited missionaries to teach a new religion in Hawaii.

Her second husband was the King of Kauai. Kaumuali’i.

Kaumuali’i and his island of Kauai were never conquered by Kamehameha but instead were conquered by Queen Ka’ahumanu and her intelligent diplomacy (and the threat of a bloody invasion by King Kamehameha’s vast armada). He offered a bloodless surrender and reigned as a vassal until 1821 when he was kidnapped by Ka’ahumanu and married to her. When he died, she forced his son into marriage with her as well.

Kaumuali’i’s first wife was the Queen Regent of Oahu – thus when the royals of Oahu were exterminated by Kahekili II,  the Kauai royals were the last of the Oahu nobles.

Now – a quick look at the monarchs of the Unified Hawaiian Kingdom. We’ve already discussed Kamehameha I. He died in 1819 and was succeeded by his son, Kamehameha II (Liholiho) and his widow Ka’ahumanu. Kamehameha II ruled for only five years and died at the age of 24. He was an extravagent spender and a drunk. Ka’ahumanu was the actuall ruler. He died in London on his first trip abroad. He was married to his half-sister, Kamamalu, who stood over six feet tall. The two contracted measles in London and died.

Kamehameha III (Keaikeaouili) was the third king of the unified kingdom. He had the longest reign unless you consider Ka’ahumanu’s time as ruler. He changed the form of government from an absolute monarchy to a constitutional one. He also created the division of land which allowed private ownership – both moves paved the way for the wealth and control of the descendents of American missionaries and settlers which eventually led to the overthrow of the kingdom.

He was succeeded by his nephew Alexander Liholiho who became Kamehameha IV. He was a good and beloved king who focused on the health and education of his people. He and his wife Queen Emma (granddaughter to John Young, English advisor to Kamehameha I) were loved by the people. He sought to protect Hawaii from growing American influence. He only ruled foer eight years. Disease was the great killer of the Hawaiian monarchs.

His brother Lot became Kamehameha V. Lot ruled for nine years. He had no heir. He continued the policies of his brother but with little success limiting the influence of missionaries and American migrants.  His sister, Bernice Pauahi Bishop refused the throne on his deathbed which led to a constitutional crisis where a new line of monarchs had to be elected. The main candidates were the step-son of Kamehameha I, William Lunalilo, Queen Emma, widow of Kamehameha iV and David Kalakaua – descendent of King Keawe – common ancestor of both he and Kamehameha the Great.

The first elected King of Hawai’i was William Lunalilo. He was popular and known as ‘The People’s King’ but only ruled for a year and left no heirs. Once again there was an election.

The winner of that election was King David Kalakaua .He was a remarkable man who excelled in

writing, architecture, music, design, and more. He was an adventurer and had grand aspirations for building a Pacific Kingdom with Hawaii in the center and all of the other islands of the Pacific in liege. Sadly, he died with his ambitions unfulfilled – a victim of the weak Hawaiian immune system (a result of 1000 years in isolation from the diseases of mankind).  His wife Queen Kapiolani (left side), was the grand-daughter of King Kaumuali’i of Kauai. She was evicted from Iolani Palace after the overthrow of the kingdom and lived out her days in Waikiki. She bequeathed lands and hospitals to the people of Hawai’i.

King Kalakaua’s sister, Queen Lilioukalani (right side) inherited the throne after his death and was overthrown by sugar planters, missionaries, and American treachery. She fought peacefully and valiantly with politics and diplomacy to restore her kingdom but she was the last of the Hawaiian monarchs.

The last true heirs to the Hawaiian Throne were Princess Victoria Kaiulani – daughter of Kalakaua’s sister, David Kawananakoa, son of Queen Kapiolani’s sister,  and Prince Jonah Kuhio, the adopted son of Queen Kapiolani and King Kalakaua. Since the kingdom was overthrown, none of them ever ascended. Today, there are descendents of David Kawanakoa who are considered the true heirs to the now non-existant Hawaiian throne. It should be noted, however, that some Native Hawaiian people reject such claims and point to the extended family of Kamehameha the Great as the true heirs. Through the years, there have been several attempts at re-establishing a Hawaiian monarchy – Honolulu Magazine has detailed those attemps in a series of excellent articles.

Where My Vanagon Goes – A Hawaii NFT Collection with Utility, Style, and Beauty

Where My Vanagon Goes – A Hawaii NFT Collection with Utility, Style, and Beauty