How does a temple in India make sure that it gets 15,000 coconuts a day delivered for its rituals?
It simply depends on the faith of its thousands of Hindu devotees who run a unique voluntary courier service to faithfully deliver the fruit every day without fail.
This is the thousands of coconuts, which can total more than 100,000 on festival days – reach the famous Maa Tarini temple in the eastern Indian state of Orissa every day.
Coconuts are used extensively in Hindu religious rites – they are offered to the gods, and smashed on the ground or some other object during initiation and inauguration ceremonies.
This free courier service relies on a network of collection boxes on roads and other temples, passenger buses and devotees simply carrying the fruit to the temple.
“It’s a religious courier service without any parallel in India,” says Gurcharan Singh, secretary of the temple administration.
He is right.
Hold a coconut in your hand on a highway in Orissa and the next bus will surely stop to pick it up to take it to the temple in Ghatgaon in Keonjhar district.
The drivers’ faith in the goddess Maa Tarini is complete – it is common to find the space behind their seats stacked with coconuts.
Even if the bus is on a different route, the driver will make sure to drop the coconuts in a collection box en route or pass them on to a bus headed for Ghatgaon.
“If I refuse to carry coconuts to the goddess, I may face various odds on my way,” says Arun Sahoo, a bus driver. 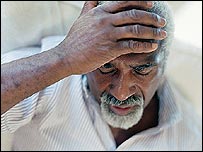