It looks like Murmur’s ass is getting a little too much attention and his bandwidth has been exceeded at his website Buttprintart.com but you can check out a video of him in action on youtube here
cd 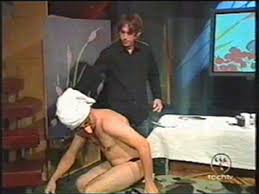 RICHMOND, Va. – To hear the students tell it, Stephen Murmer is a fun, popular art teacher who is always quick to crack a joke. But there is another side to Murmer. A side that has agitated school officials and resulted in his suspension. A side that focuses, almost entirely, on the crack in his backside.

Outside of class and under an alter ego, the self-proclaimed “butt-printing artist” creates floral and abstract art by plastering his posterior and genitals with paint and pressing them against canvas. His cheeky creations sell for hundreds of dollars.
This has not gone over well with Chesterfield County school officials, who placed Murmer on administrative leave from his job at Monacan High School.

Murmer contacted the American Civil Liberties Union of Virginia after he was suspended on Friday, ACLU legal director Rebecca Glenberg said. He told Glenberg that administrators had suspended him with pay for five days because of his work as a butt-print painter and that he also could face unpaid suspension pending an investigation.
Murmer has been instructed by the school administration not to speak with the media, Glenberg said. He did not return messages seeking comment Tuesday.
Chesterfield County schools spokeswoman Debra Marlow confirmed that a Monacan art teacher had been placed on administrative leave but declined to provide additional details because it is a personnel issue.
“In the school system, personnel regulations state that teachers are expected to set an example for students through their personal conduct,” Marlow said. “Additionally, the Supreme Court has stated that schools must teach by example and that teachers, like parents, are role models.”
Murmer went to great lengths to keep his work life separate from his activities as an artist, said ACLU executive director Kent Willis. As a butt-printing artist, he goes by the name “Stan Murmur,” and appears in disguise in photographs and videos promoting his art.
“As a public employee, he has constitutional rights, and he certainly has the right to engage in private legal activities protected by the First Amendment of the Constitution,” Willis said.
A nearly naked Murmer expressed concern about remaining incognito during a 2003 appearance on the now-canceled cable television talk show, “Unscrewed With Martin Sargent.” In a clip from the show, available on YouTube.com, Murmer dons a fake nose and glasses, a towel on his head, a black thong — and nothing else.
“I’m certainly proud of the ass painting,” Murmer said in response to questions about his disguise. “I do have a real job where I do have real clients and I don’t think they’d be too understanding if I was also the guy who painted with my ass.”
That video has made the rounds at Monacan High, where the mere mention of Murmer’s name was enough to elicit grins from students Tuesday. Most appeared to be firmly behind their teacher, describing his suspension as “stupid,” “ignorant” and “kinda retarded.”
“Everyone has been talking about it,” senior Heather Thompson said with a laugh as she and other students streamed out of school.
Thompson, who worked with Murmer in the school’s art club, said many students have known about his paintings for a few years, but the YouTube clip recently got everyone buzzing. She and other students described Murmer as a funny, likable and popular teacher. There is little support among the student body for his suspension, she said.
“It was simply him expressing himself and his art, and it had nothing to do with school — he wasn’t advertising,” she said.
This is not the first time Murmer has faced potential problems because of his extracurricular activities. Three years ago, he contacted the ACLU after he was told school administrators were unhappy about his paintings, Willis said. The issue eventually blew over with no suspension issued, Willis said. It was unclear why administrators decided to take action now.
Owning a piece of Murmer’s art doesn’t come cheap. On his Web site, his creations run upward of $900. His most popular piece, “Tulip Butts,” goes for $600.
So how does one become a butt-printing artist? On his Web site, Murmur said his journey began a few years ago when he was told to find an organic item to use as a stamp for a class painting assignment. He decided to use his posterior. His final product was a hit with the class and a butt painter was born.
He was, however, the only student not asked to hold up his organic stamp.

December 14, 2022
Art Not To Miss at the Metropolitan Museum of Art in New York City