Well, it happened – Charles Taylor was arrested in Nigeria and sent to the UN Special Court in Sierra Leone. Echoing Saddam, he began by saying that he did not recognize the jurisdiction of the court. He eventually entered a “not guilty” plea.
The trial may be moved to The Hague. It is acknowledged fact that Taylor still controls forces that might try to free him. When now-dead rebel leader Foday Sankoh was on trial, he had to be kept on a small island offshore from Freetown to minimize the chances of a “jailbreak.”
It seems that Taylor is currently in the notorious Pademba Road Prison, a grim place with walls still pock-marked by bullets from the long conflict. The road outside the prison is a favorite spot for teenage beggars whose arms and legs were amputated by the rebels.

Former Liberian President Charles Taylor has pleaded not guilty to all charges in his first appearance at a war crimes court in Sierra Leone.
…
Security was tight at the court in Sierra Leone’s capital, Freetown, as Mr Taylor arrived for his first appearance.
Wearing a dark suit and red tie, Mr Taylor listened impassively as 11 charges of war crimes and crimes against humanity were read out, the BBC’s Mark Doyle in Freetown says.
Before pleading not guilty, Mr Taylor told the judge: “I do not recognise the jurisdiction of this court.”
The judge dismissed this argument and asked again how he pleaded. Mr Taylor responded: “Most definitely, I did not and could not have committed these acts against the sister republic of Sierra Leone.” 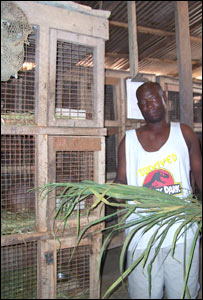