Big Mahalo to Bruddah Jon in SoCal for sending me these party wave links.

DEBBI FARR BAKER / Union-Tribune
Surfers pose for a group shot on South Carlsbad State Beach prior to their attempt at breaking the Guinness Book record for the most surfers riding the same wave at the same time.
June 30, 2005
CARLSBAD – It can get crowded in the lineup, but 40 people on one wave?
It took 16 tries, but surfers at South Carlsbad State Beach yesterday managed to unofficially break into the Guinness Book of Records for having the most surfers on the same wave, with 40 finally standing simultaneously and riding toward the shore.
SignOnSanDiego.com > News > North County — 40 do a swell job on surfing record
Follow Up Story 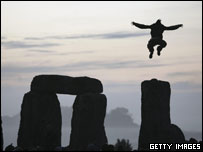