Here’s another Sierra Leone story that is a real bummer. The extent of the devastation caused by war there is hard to comprehend.

Everyone you meet in Sierra Leone has a story to tell you about how the war affected them, or their family, and of the struggle to make a living and gain any quality of life in the peace.
But the enormity of the incidence of sexual abuse that occurred during the war is shocking.
Human Rights Watch has estimated that 64,000 women and girls were subjected to sexual abuse, mostly by the rebels but also by members of the armed forces.
The true figure is probably much higher, considering most rapes went unreported.
However, after the war, girls did not benefit from the demobilisation process or DDR as it was known, whereas the young male combatants did.
This was largely because combatants were asked to hand over guns in order to get access to facilities and programmes – this excluded girls as, even though some had carried arms, most had served as cooks, porters and “bush wives”.

Despair
Music blares out on to the street from the Flamingo Club Disco in Makeni, Sierra Leone’s largest northern town and the former headquarters of the rebel forces during the war.
Inside, some young girls sit rather forlornly on chairs by the dance floor waiting to be approached, while others gyrate to the music, either together or with the men who frequent the club.
These are the lengths to which many young girls have to go to survive.
They can see no other way but prostitution.
“There is nobody to take care of me and my baby,” one of them said.
“So I come out here and talk to men, whatever little they give me I use to feed my baby boy. The rebels amputated my father’s hands and later killed him. My mother died out of despair.”
Rehabilitation
Christiana Thorpe heads Forum for African Women Educationalists (FAWE). Her organisation runs a rehabilitation programme for war affected and sexually assaulted girls.
“I would say that 99% of the girls who were affected by the war were not catered for.
“The boys got training, through the demobilisation process, money – they got everything and the girls were left out.”
During the war, Sarah was “married” to a rebel husband in the bush.
Since the conflict ended in 2002, the main challenge facing girls like Sarah has been dealing with the stigma attached to them.
Even after the horrors of the war they’ve had to face the judgement of the community and live as social outcasts.
Worst of all, many found themselves rejected and driven out by their own parents.
Sarah became pregnant during the war. The father was a boy who was himself captured by the rebels and forced to fight with them.
After the war she attempted to rejoin her family but was driven out by her uncle when he realised she was pregnant.
She said she was filled with shame about her situation but has now been helped by a project called Hanci.
”I feel much better now, because when I was with the boy I saw many injured and even dead people,” she says.
“I saw people die of hunger and so much suffering. I saw it all, I’m so much happier now. I’ve been able to go back to school.” 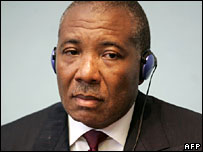