This is the kind of scumbag we have setting policy….the kind of guy that uses his power to settle (or attempt to settle) personal vendettas…but then we are in Iraq because W. said “That guy tried to kill my dad.”

WASHINGTON (Reuters) – Top White House advisor Karl Rove was one of the secret sources that spoke to reporters about a covert
CIA operative whose identity was leaked to the media, Newsweek magazine reported in its latest edition.
The magazine said Rove’s lawyer, Robert Luskin, confirmed that Rove talked to Time magazine about former ambassador Joseph Wilson and his wife, CIA agent Valerie Plame.
Luskin said Rove recently gave Time magazine reporter Matt Cooper permission to testify about the conversation to a grand jury investigating the leak in 2003, according to Newsweek.
A U.S. federal judge ordered Cooper, along with New York Times reporter Judith Miller, to testify and reveal their confidential sources.
Bush aide Rove was Time reporter’s source-Newsweek – Yahoo! News 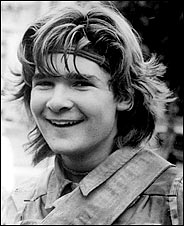