WINDHOEK (April 10) – Pregnant Hollywood siren Angelina Jolie and boyfriend Brad Pitt have taken refuge in a remote Namibian game lodge where wild lions will help protect them from the media, a Namibian newspaper said on Monday.
The celebrity couple and their two adopted children Maddox and Zahara arrived in the southern African country last week, fuelling media speculation the Oscar-winning actress plans to give birth in Namibia away from the spotlight.
Namibian Afrikaans daily newspaper Die Republikein said the pair had moved from a luxury beach resort in the harbor town of Walvisbay to a lodge in the Etosha National Game Park in northern Namibia, where lions are a top tourist draw and would help deter intruders trying to photograph the couple.
U.S. tabloids say Jolie and Pitt’s baby is due on May 18. The media had speculated that Jolie would give birth in France as a tribute to her French mother, who is dying of cancer. 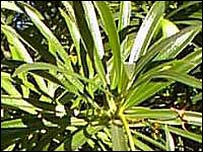