THE guidebooks touted Bed Supperclub, where the hip and beautiful recline while they eat, and the airline magazine featured the Australian Amanda Gale, who has set the town on its ear with her fusion food at Cy’an. But I was looking for something more traditional, so as soon as I had settled into my hotel room, I picked up the phone and called Robert Halliday, an American writer and gourmand who has lived here so long that he finds vacations without Thai food painful.
“Welcome back to Bangkok,” he said. “Prepare to eat like a shark.”
Soon, he and I, a pair of ample fellows, were accordioned into the back of a not-so-ample taxi, en route to Chote Chitr, a modest establishment with only five tables, near the famous temple, Wat Suthat. “You won’t believe the banana-flower salad,” he enthused as we wove through the city’s notorious traffic. “It’s one of the wonders of the world, up there with the late Beethoven quartets.”
On the Streets of Bangkok, Two Guys Keep It Real – New York Times 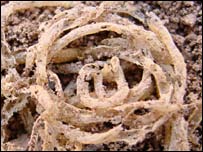