In a nutshell, it works, but only in the most loosely defined sense of the word.

I feel like I have traveled around enough in Morocco at this point to write a small piece on how transport works here. In a nutshell, it works, but only in the most loosely defined sense of the word.

In my initial traveling around Morocco, I thought that maybe as a foreigner I just wasn’t getting it and that if I were a local or had the knowledge of a local, I would find how it worked, well, thanks to Hanane, I have discovered how it works and that as a foreigner with no guide book and no clue, I was doing just as well or better than just about everyone else. The exceptions are those who have private cars.

Airplanes: I haven’t flown in Morocco yet, but assume it is more organized than other forms of transport. Although I checked online and it seems that flights are actually fairly intermittent and not tightly scheduled at all.

Trains Trains are definitely the best way to travel in Morocco. The only problem is that you can’t go everywhere on trains. In fact, you can go roughly from Tangiers to Rabat to Casablanca to Marrakech to Meknes to Fes and to Tangiers and that is about it. The stops are not often marked clearly, the trains make major stops that last less than 30 seconds at times, and you are often required to change trains in obscure locations without any clear indicator. The conductors are not very helpful. First class is less hectic than second class and not too much more money. the stations are generally clean but still you will be hit up for cash by anyone who recognizes you as a foreigner and is the type of person that hits foreigners up for cash.

Buses There are local buses that you get a ticket from the guy on the bus on and the more efficient long transport buses. Again, no clearly defined stops, no real help from the drivers, sometimes you have to pay for baggage going underneath, sometimes you don’t. The bus times and schedules are not at all clear, rarely or not posted, and even if you have a seat assigned, you can expect to find someone in it and then you just find another seat. The more local style buses will sell more tickets than seats and while they don’t seat people on the roof, Hanane and I rode on a blanket covered gearbox next to the driver that wasn’t too uncomfortable but required everyone exiting the bus to climb over us. Next to us was a guy on a stool, a guy hanging out the door, and the driver smoking while he blared tinny Moroccan music. This was about an hours ride. Oddly romantic except for the baggy pants kid in the Palestinian scarf who kept flinging unwanted comments towards us. When we got off the bus in Fes, Hanane ripped him a new one and he meekly apologized and went on his way. There is more to this story, but you will have to hear it over coffee with me someday…
Anyway, buses are scheduled badly and few and far between, overcrowded, and pretty fun…watch your bags close and be careful not to miss your stop. 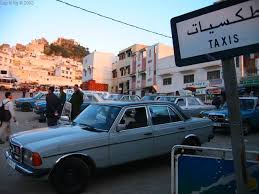 Grand Taxis These are by far the craziest means of transport in Morocco. These are Mercedes sedans that provide the main means of transport between small Moroccan towns. Different colors for different regions. Fares range from 5-20 dirhams and typically this is how they work. The drivers converge with their cars in a station and the people come to go, when there are 6 passengers, the driver gets them all in the car and like sardines you journey to your destination, bit it 10, 20, or 100 miles away. Sometimes, there are more passengers than taxis and when this happens, if a taxi comes in, passengers swarm and chase after it and try to be the first to pull the passengers out so they can take the seat. While I didn’t see anyone get thrown on the ground yet, I am sure it happens, I am also sure that fist fights break out over these. So if you are in a grand taxi and you come into a station and forty people start chasing and swarming your taxi, don’t worry, they just want a lift out of that town. The grand taxi stations are generally dirty mud filled lots with dirty men and dirty little shops surrounding. Not the nicest places but necessary. No schedules, no set times, and sometimes the location of the grand taxi ‘stations’ changes without notice. Very efficient. Usually pretty honest about the set prices, but its best to watch what they charge the locals and then just hand then the correct change. 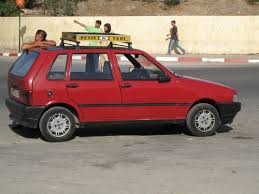 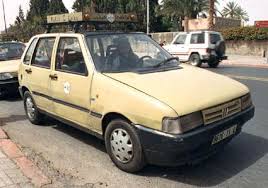 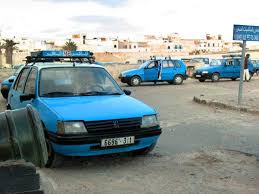 Petit taxis These are the main means of local transport. I think they are yellow in Sefrou, Red in Fez, Blue in Rabat, Green in Casablanca, and maybe Red in Marrakech…actually, I’m sure I screwed up the colors, but each city has its own color. Short fare should be anywhere between 4 and 15 dirhams but a meter is the best way to go though not available in smaller places. A set fare beforehand is a good idea. If the robbers in Tangiers or Fez get a hold of you expect them to tell you 20-50 dirhams for a short ride and be prepared to tell them to go fuck themselves. Easier is just demand a meter in these places. Drivers are generally good guys though. Typical is for man to get in the front and women in the back, but then other people might get in your taxi, this is supposed to lower your fare, but if you don’t speak Moroccan will only lower theirs.
In summary, you are damn lucky if you manage to get anywhere at all in any amount of time. Enjoy.
Originally published 3/10/09

December 17, 2022
Round the World Trip 2022 Complete -Costs Broken Down and Explained – Back Home in Hawaii