LOS ANGELES (AFP) – Firebrand director
Michael Moore lashed out at the United States government on Friday following revelations he is being investigated over a recent trip to Cuba for his new film.
Moore is the subject of a probe by the US Treasury after he took a group of rescue workers in the September 11, 2001 attacks to Cuba for medical treatment during filming of “Sicko,” possibly violating a 45-year-old US embargo that limits trade and travel to the country.
In his first response to the controversy, Moore, the Oscar-winning director of “Bowling for Columbine” and “Fahrenheit 9/11,” said he was the victim of a politically-motivated investigation.
“I believe that the decision to conduct this investigation represents the latest example of the Bush Administration abusing the federal government for raw, crass, political purposes,” Moore wrote in a letter to Treasury Secretary Henry Paulson posted on his website (www.michaelmoore.com).
“There are a number of specific facts that have led me to conclude that politics could very well be driving this Bush Administration investigation of me and my film.”
Moore said he was surprised by the timing of the investigation, which comes two weeks before the premiere of “Sicko” at the
Cannes Film Festival and one month before its US opening.
US authorities had known about the Cuba trip since last October, he said.
Moore also claimed the US health care and insurance industry — which are both targeted in the film — were supporters of
President George W. Bush and the Republican Party.
“I demand that the Bush Administration immediately end this investigation and spend its time and resources trying to support some of the real heroes of 9/11,” Moore concluded.
Bush has been a frequent target in Moore’s films, notably in the 2004 documentary “Fahrenheit 9/11,” which accused Bush of exploiting the September 11 attacks to justify wars in Afghanistan and Iraq.
Moore also famously criticised Bush during his speech accepting an Oscar for “Bowling for Columbine” in 2003, just days after the Iraq war started. 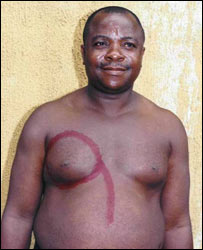