Why am I not surprised?

The office of Mexican President Vicente Fox says he will not sign a bill that would have legalized possession of small amounts of drugs such as marijuana, cocaine and heroin.
President Fox’s office said in a statement Wednesday that the law would be sent back to Congress for changes. The statement said in Mexico, the possession of drugs and their consumption “are, and will continue to be, crimes.”
The Mexican Senate passed the bill last week, surprising many in the United States. Mr. Fox’s office had said he would sign the measure. 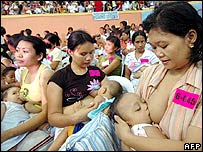