What?!? One BILLION dollars?!? Now don’t get me wrong – the WTC disaster was a horrible tragedy and I have no objection to a memorial for the thousands of people who died there.
But they are DEAD! Sure, build a nice elegant little memorial – hell, spend a few million if you want – but, spend a BILLION on the LIVING people that need it. Spend it on schools, food, medicine, etc. Rations for Darfur refugees have been cut by the UN World Food Programme because they are OUT OF MONEY!

The projected cost of building the World Trade Center memorial complex at ground zero has soared to nearly $1 billion, according to the most authoritative estimate to date.
Rebuilding officials concede that the new price tag is breathtaking — “beyond reason” in the words of one member of the World Trade Center Memorial Foundation board — and it is sure to set off another battle over development at the 16-acre site, with calls to cut costs, scale back the design or even start over.
…
The new estimate, $972 million, would make this the most expensive memorial ever built in the United States. And that figure does not include the $80 million for a visitors’ center paid for by New York State. It is likely to draw unfavorable comparisons to the $182 million National World War II Memorial in Washington, which opened in 2004; the $29 million Oklahoma City National Memorial, which opened in 2000; or the $7 million Vietnam Veterans Memorial in Washington, which opened in 1982.
The original World Trade Center itself cost $1 billion in the 1970’s, or about $3.7 billion in current dollars. Then again, everything at ground zero carries a big ticket, from the $478 million vehicle-screening center to the $2.2 billion PATH terminal. 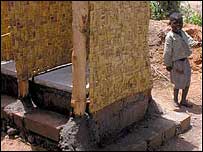