A pair of sunglasses worn by actor Steve McQueen have sold for $70,200 (£36,762) at a Los Angeles auction.The tinted glasses, seen in The Thomas Crown Affair, were sold to an anonymous buyer at Bonhams auction house.
More than 200 items belonging to the Hollywood legend were being sold by his widow, Barbara, including leather jackets, jukeboxes and film props.
McQueen, who died in 1980, starred in The Great Escape and Bullitt and was famed for his love of motor sports.
One of his motorcycles, a 1937 Croker, fetched a world record price of $276,500 (£144,800) at the auction. 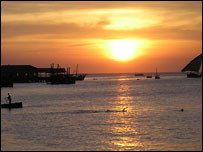