The holidays have been somewhat hectic here at Fukn.us and I realize that I have been a post and run sort of editor for the most part as late…I will work on that. Of course over New Years weekend MH and I will be taking a short hiatus….just a warning for ya…
Yesterday we had a tremendous number of hits and if you clicked on the link you can find numerous comments regarding anarchists, buddhism, my books, my philosophy, etc…
The question I have is why haven’t you posted any comments here?
Anyway…enjoy the robots….
cd
VW Touareg Stanley Tops List of the 50 Best Robots Ever
End of the year is always the time to publish rankings. Wired Magazine has an interesting one. They ranked the best 50 robots of all times.
Interesting is that they chose the winner of this years DARPA Grand Challenge. Stanley, the Stanford University autonomous Volkswagen Touareg is the best robot of all times. ( at least until next year).
The Wired Magazine top 50 robot list also contains Astroboy, Terminator or the Tin Woodman – Somehow they had to fill the list.
They forgot the sexiest robot though – the Repliee Q1 aka Actroid. I mean what the heck, she breathes. Prominently missing is also Honda’s Asimo. Even that Asimo can run now did not qualify him for Wired Magazine (at least they listed his predecessor, the Honda P2).
See also PC World’s Top 50 Gadgets of the past 50 years 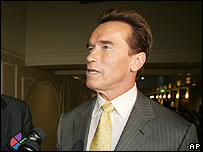