I have not been to Monrovia, but Freetown, the capital of neighboring Sierra Leone, sounds very similar – in a city of almost one million (bigger than Honolulu), there was almost never electricity and the traffic lights had not been functioning in many years. There was no shortage of drivers, however, and the gridlock was amazing.
So, now Monrovia has ONE light which only works on occasion… I suppose you have to start somewhere. Yes, I’m laughing at this as being sort of a drop in the bucket, but I also hold tremendous hope that new president, Ellen Johnson-Sirleaf, can actually turn Liberia around and serve as a stabilizing influence and a model for Sierra Leone.

Liberia’s capital, Monrovia, has got a working set of traffic lights for the first time since war broke out more than 16 years ago.
The lights, built by the peacekeeping mission of the UN, have given motorists new hope that normality is returning.
More than half of Liberia’s motorists were not driving when traffic lights last operated in the city.
However, the city does not have a regular supply of electricity and so the lights are often out of order.
The lights are located near Monrovia’s main port – a key entry point to Liberia, which can be subject to terrible traffic jams.
People who drove in the city before everything was destroyed in the 14-year war say the war-time drivers need to learn how the lights work. 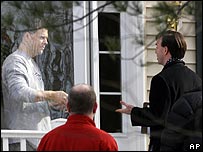