Its September 11th 2006, Camp Victory, Bagdad, Iraq , grid coordinates …secret…. at one point, I may not think its strange the outcome of events and how I find myself where I am right now. I will be at ease and unquestioning, like a rock at the foot of a statue of buddah. kick me and I will roll, probally off the mountain into a stream and become shiny and smooth with the passage of time. As you can tell, I am slowly losing it, but in a good way. Some of you may question if I ever had ‘it” to begin with, I think I had a little bit of “it” but now that little bit is going going going away. Today everyone with a bright idea and who is an officer is putting in thier 2 cents about what we should do on this day in particular, people are reminicing , retreving old memories and remembering why they decided to serve. Our battle cry is , fight them over there so we don’t have to fight them in our own backyard. If they want a fight, we will come to them and kick thier ass. Of course there is a disconnect for me past the rah rah of it all. The truth is we should be kicking down Irans door not in Iraq. Here is a question for you! Why is Iran so adamant about making a nuclear reactor? Iran says its for the energy. Well guess what they have one of the largest fuel reserves in the world. They have no need to build an expensive nuclear power plant for energy when oil is litteraly bumbling out of the ground. They actively finance and give arms to terrorist groups in Syria and Lebanon, give quarter to terrorist groups in thier own country, and have numerous spies in Iraq trying to start a civil war, and have succesfully squashed all free thought and secularism in thier country. Lots of us think we will soon go into Iran, alot of us are scared of that possibility. But after diplomacy does not work, the real terrorist threat will emerge from and be born out of Iran. On September 11th, when we wipe away the tears and not get swayed by emotion or political wranglings we need to identify and destroy credible terrorist threats. The biggest is Iran. That is a fight worth taking on. If there is a reason to be upset with Bush its because he picked the wrong country to invade, it should have been Iran. they had a lottery for leave dates, some people are going home inone month to start thier 2 week leave. i know most of us want it closer to the middle of the deployment, I know my friend said he expects his leave to be around late october. he is even thinking about not going home, because his wife won’t be able to get time off. One part of me thinks it would be strange to go on leave while I am here. being here is like being placed in a big vat of shit, do you really want someone to take you out of it, wash you off, clean you up, and show you a good time for a tiny bit and than throw you again back in the vat of shit. thats a good philosphy question you can pose to your friends. one of the good side effects of being here is that I no longer care when my sports teams win or lose, the dolphins lost and I could really care less, its funny what emphasis and importance we place on things that really don’t matter. Maybe woman already realize that about sports, nah, I won’t give them that much credit. you know what sucks, is no days off, don’t even have a chance to go down to the haji bazzar and pick up some pirated movies or a rug with camels on it, or fuses, or a tea set (not that i need a tea set) but i was thinking of getting one and live it up like a ‘bed-o-weeeeen’ at hotel california. (just the sound of california sounds like a memory I will never get a chance to recapture) sleep well friends and loved ones, we got your back down in the I to the R to the A to the Q 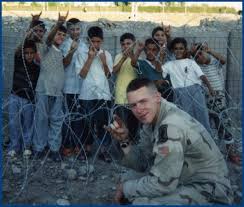