When I was in Kyrgyzstan in 2003, it seemed like the most stable and tolerant of the Stans. Then came the overthrow of President Akayev last March, followed by continued unrest. Now the Kyrgyz are shooting it out for the position of head of the Olympic committee…

A prominent Kyrgyz wrestler, Raatbek Sanatbayev, who was running for the presidency of the country’s Olympic committee, has been shot dead.
The Kyrgyz authorities say Sanatbayev was killed by gunmen near his home in the capital, Bishkek, on Sunday. There have been no arrests so far.
They say his killing could be linked to his candidacy for the Olympic job – a post seen as influential in Kyrgyzstan.
The previous post holder, Bayaman Erkinbayev, was also killed violently.
Erkinbayev, who was a member of the country’s parliament, died last September during a wave of unrest that swept the country.
Police say his killing may have been connected to the supply of illegal drugs to prisons. 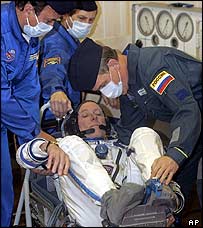