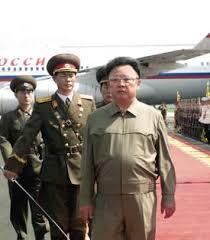 Apparently…he is evil and insane…..hmmmm
Scotsman.com News – Latest News – Kim Jong Il ‘An Evil Man’ – U.S. Army Deserter
Kim Jong Il ‘An Evil Man’ – U.S. Army Deserter
“PA”
US Army deserter Charles Jenkins said today he regrets leaving his post for communist North Korea, where he spent nearly 40 years, and called the isolated countryâs dictator Kim Jong Il âan evil man.â?
Jenkins, 65, said he was never brainwashed but lived in harsh conditions in North Korea and never expected to see his mother again. He was reunited with his 91-year-old mother, Pattie, last week.
Jenkins, speaking from his sisterâs home in Weldon, North Carolina, said he was sorry that as a 24-year-old sergeant with the US Armyâs 1st Calvary Division, he left the squad he was leading on patrol in the Demilitarised Zone and walked into North Korea on July 5, 1965.
âI let my soldiers down. I let the US Army down. I let the government down, and I made it very difficult for my family in the US to live,â? Jenkins said, according to a story posted on The News & Observer of Raleighâs website.
While he appeared in North Korean propaganda films and taught English, Jenkins said North Korean agents were never able to break him and he was never brainwashed.
North Koreaâs Kim Jong Il âis an evil man,â? Jenkins said.
âHe only believes in one thing â his own personal luxury life.â?
Jenkins remained in North Korea after his wife, who had been kidnapped from Japan in 1978, returned to her home country in 2002. Jenkins reunited with his wife last year in Japan, where he was court-martialed and served 25 days in a US military jail.
Jenkins has said he has no plans to move permanently back to the US and only wanted to see his ailing mother and make one last visit to his homeland. He was accompanied by his wife and their two daughters, and they plan to return to Japan this week.