I can see how Kazakhstan might be a little miffed… but, c’mon, Kazakhstan, you have to admit it’s pretty fukn funny, no?

ALMATY (Reuters) – The authorities in Kazakhstan, angered by a British comedian’s satirical portrayal of a boorish, sexist and racist Kazakh television reporter, have pulled the plug on his alter ego’s Web site.
Sacha Baron Cohen plays Borat in his “Da Ali G Show” and last month he used the character’s Web site www.borat.kz to respond sarcastically to legal threats from the Central Asian state’s Foreign Ministry.
A government-appointed organization regulating Web sites that end in the .kz domain name for Kazakhstan confirmed on Tuesday it had suspended Cohen’s site.
“We’ve done this so he can’t badmouth Kazakhstan under the .kz domain name,” Nurlan Isin, President of the Association of Kazakh IT Companies, told Reuters. “He can go and do whatever he wants at other domains.”
Isin said the borat.kz Web site had broken new rules on all .kz sites maintaining two computer servers in Kazakhstan and had registered false names for its administrators.
Cohen, as Borat, hosted the MTV Europe Music Awards in Lisbon last month and described shooting dogs for fun and said his wife could not leave Kazakhstan as she was a woman.
Afterwards, Kazakhstan’s Foreign Ministry said it could not rule out that he was under “political orders” to denigrate Kazakhstan’s name and threatened to sue him.
Cohen, who is Jewish, responded to the legal threats on the www.borat.kz site in character, saying: “I have no connection to Mr Cohen and fully support my government’s position to sue this Jew.”
In typical vein, he went on: “Please, captain of industry, I invite you to come to Kazakhstan, where we have incredible natural resources, hard working labor and some of the cleanest prostitutes in all of Central Asia.”
Borat is one of several outrageous characters devised by Cohen in his television shows. He shot to fame as Ali G, who mocks British street gang culture, and also plays Bruno, a gay Austrian fashion show presenter. 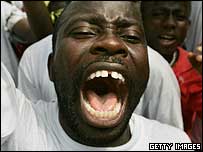