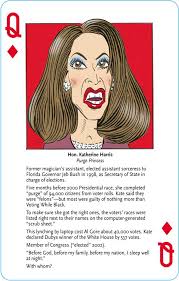 The smallest things would set her off.
Buying the wrong candy for her to toss at parades. Photographing her vertically instead of horizontally. Failing to bring her favorite Starbucks beverage (extra hot venti triple latte, no fat, no foam, one SweetâN Low).
One minute, U.S. Rep. Katherine Harris would lavish campaign staffers with praise and hugs. The next she would lose her temper, screaming âstupidâ? or âidiotââ at a startled employee.
âYou never know what you are going to get,ââ said Mike Miller, who left in February after serving eight months as her finance director. âSome days, it would be great. Other days, it would be ‘Oh my God.âââ
Harris, the leading Republican in the U.S. Senate race this fall, has lost at least 25 campaign staffers in the past year, including three campaign managers and a slew of prominent consultants. Even in politics, a world of hard-to-please bosses and oversized egos, thatâs an unheard of number for one campaign.
A few weeks ago, the core staff at her Tampa headquarters quit en masse. It was the second mass exodus.
âShe just wears people down,ââ said Ed Rollins, a nationally known Republican consultant, who served as her top aide until he left in April.
Harris, 49, a two-term congresswoman from the Sarasota area, has spent much of the past year in an endless cycle â hiring employees, alienating them, then begging them to stay. Her staff turnover, in both campaign and congressional offices, has become the subject of jokes in political circles, even bets over who might be next to leave.
Harris refused to comment for this story, saying in a statement that she would not respond to âunethical leaks and malicious gossip.â? But she made some brief comments about her staff after a campaign debate in Pinellas County last week.
âWe are on a whole new upswing,ââ she said. âThe new staff is good, the new staff is great. Thatâs the best thing thatâs happened to us â¦We have a staff thatâs committed to me to win, not to undermine me and maybe lose, and weâre excited about that.â?
The St. Petersburg Times contacted Harrisâ former campaign staffers, interviewing more than a dozen. Many compared her to the over-the-top boss portrayed by Meryl Streep in The Devil Wears Prada and all but one described Harris in a strikingly similar way.
They cited her demeaning comments, her practice of pitting staffers against another, her unwillingness to take advice and her penchant for getting caught up for days in the tiniest details, such as the exact shade of blue to use on her business cards.
Harris frequently questioned her employeesâ loyalty and accused them of betraying her by writing negative e-mails about her, running an anti-Katherine Harris Web site, even working with an opponentâs campaign.
Spokeswoman Jennifer Marks said Harris had grown tired of the misperceptions about her and would refer the newspaper to other former staffers who would speak positively about her. After more than a week, her office failed to produce any names.
âKatherine is her own worst enemy,ââ said Anne Dunsmore, a well-known national fundraiser who left Harrisâ campaign in March. âI have never seen anyone sabotage themselves so much.â?