This is the latest news from Lakewood, the fair city of my birth….
cd

SEATTLE (Reuters) – Police are on the lookout for members of a machete-wielding gang in angry clown make-up after a rampage of robbery and violence that left nearly two dozen people injured in a park in western Washington state.
The group, who said they were “juggalos,” devotees of the Detroit-based rap-metal group Insane Clown Posse, attacked and robbed visitors to Fort Steilacoom Park while shouting “Woo, woo, juggalo!” to each other, according to court documents.
Prosecutors in Pierce County south of Seattle charged three people with assault and robbery last week, but police in the City of Lakewood said they are searching for another eight to 10 suspects who took part.
According to police reports, some members of the gang wore black hooded sweatshirts or clown make-up and told victims they would “cut their heads off” with machetes. They stole cash, wallets and cell phones, the reports said.
“We don’t see too many attacks like this,” said Lakewood police Lt. Dave Guttu.
Juggalos often dress in black and wear clown face paint. 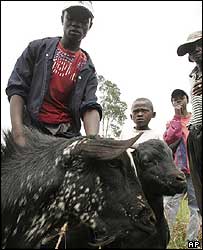