Sudan seems to have figured out that if they keep Darfur out of the news it won’t take long for the pathetically weak display of outrage from the rest of the world to die down.

EL FASHER, Sudan, Aug. 27 — The Sudanese government has charged Paul Salopek, a foreign correspondent for The Chicago Tribune and winner of two Pulitzer Prizes, with espionage and entering the country illegally. Mr. Salopek crossed the border from Chad into the troubled region of Darfur without a visa about three weeks ago.
Mr. Salopek, who was on leave from The Tribune and on assignment for National Geographic magazine, was captured Aug. 6 by a militant group allied with the government and handed over to the Sudanese Army, said one of his lawyers, Omar el Faroug Hassan.
He was held without outside contact until 10 days ago, when the United States Embassy in Khartoum was notified of his detention and he was allowed access to a lawyer.
He is the third Westerner detained and charged after crossing the border from Chad this month. An American college student was detained and deported this month after making a similar journey. Tomo Kriznar, a filmmaker and human rights advocate acting as the envoy of Janez Drnovsek, the Slovenian president, was sentenced to two years in prison after being convicted on charges similar to those Mr. Salopek faces. 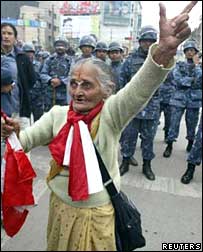