Here’s an UPDATE on the toxic sludge dumped in Ivory Coast back in August.  When it proved too costly for a ship run by the Dutch company Trafigura to dispose of the waste in Amsterdam, they continued on to Africa and finally found a company in Ivory Coast that agreed to take the sludge.  A few inquiries would have shown that there were no facilities in Ivory Coast capable of handling the waste.  Instead, the contracted company filled tanker trucks that fanned out across Abidjan and just dumped it out in various locations.

A ship carrying some 3,000 metric tons of toxic waste has arrived in the French port of Le Havre from the main Ivory Coast city, Abidjan.The waste, which is to be neutralised, was dumped in Ivory Coast in August, and has been blamed for causing the deaths of 10 people there.
In addition, more than 60 people were taken to hospital and up to 100,000 had vomiting and breathing problems.
Ivory Coast has begun an inquiry into the waste, shipped by a Dutch firm.
The ship, the MN Toucan, arrived in Le Havre after a 10-day journey from Abidjan with 141 sealed containers on board.
France’s Ecology Minister Nelly Olin said Ivory Coast had asked for French help because it “was not able to treat” the waste.
Further waste shipments between Ivory Coast and France are expected. 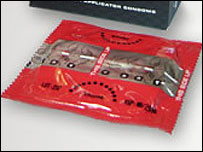