(submitted by KG)
BBC NEWS | South Asia | India’s rent-a-guest wedding agents
India’s rent-a-guest wedding agents
Indian couple getting married
An agency has been set up in the Indian state of Rajasthan to rent out wedding guests for couples keen to boost numbers at their marriage.
In Rajasthan weddings are huge family events – so much so that to not have enough guests may be embarrassing.
To prevent this from happening an agency called the Best Guests Centre has been set up in the city of Jodhpur.
Its founder, MI Syed, got the idea for the agency when a friend married a woman from a different caste. The groom’s family did not approve of the marriage, and only five guests turned up.
“I began thinking, if we could just somehow get some more people into this place, we could all have a good time together and my friend would feel good as well,” Mr Syed told BBC World Service’s Outlook programme.
“This is how I got the idea for the business.”
Pretend friends
The Best Guests Agency has around 70 people on its books. They can turn up either traditionally dressed or in smart Western clothes, and are briefed on family history and pretend to be friends from the past.
Mr Syed explained that demand for his guests is growing because of the break up of extended families and lack of contact with relatives.
“If there are lots of guests who come to your wedding, people think you have greater influence and greater prestige in society,” he said.
“Sometimes people can’t afford to travel far, or people just don’t have enough time. That’s when we step in.”
Some of the guests for hire are students, but others are doctors, chartered accountants, and other professionals.
“You might wonder why doctors want to come,” Mr Syed said.
“But I suppose they don’t mind having a nice evening out, and I pay them well.”
The amount charged per guest is varied according to what Mr Syed described as the “level” required, and how smartly it is wished that they dress.
Three categories are offered, with the highest – at around 600 rupees – being be-suited guests who are tall, well-built, light-skinned and who can converse well.
Mr Syed said that he has been contacted by families from far outside the state, including Bangalore, Calcutta and even Dubai.
“My people are well-trained,” he added.
“We brief them specifically on each and every point about the family.
“The hired guests first go and spend some time with them, so that they know the style and atmosphere of the home. Then they behave accordingly.
“That’s the reason why I’ve helped in 10 marriages so far – and not one of my guests has ever been found out.” 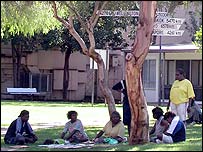