Castrated males are no longer recognized as male by Indian law, nor are they considered female.

Sudha is dusky and wears a salwar kameez, a traditional dress for women in India, but no make-up.
She is a eunuch (or “aruvani” as they now prefer to be called) and represents a group of transsexuals seeking respect for their identity and greater acceptance in society.
“While transgender people must protect their identity, we are willing to do our bit to gain acceptance,” says Sudha on the sidelines of a community festival in southern Tamil Nadu state.
“If necessary we will dress down, tone down our speech, even desist from the commonly misunderstood practice of ‘clapping’ and negotiate with people in work and social settings.”
Since most hijras end up being stereotyped as cross-dressing men, feared for their lewdness and aggression, the aruvanis face many day-to-day challenges, linked with their identity.
New tactics
For most hijras, as Indian transsexuals are called, their physical appearance is an extension of their transgender identity.
Lavish doses of make-up, flowing wigs, harsh, staccato clapping and aggressively sexual speech and body language are tokens of belonging, entrenched at an early age by community leaders.
Sudha and her friends want hijras to change tactics to win acceptance.
Eunuch groups now participate in community-led inter-personal communication sessions regularly in what they see as a pragmatic way to learn how to negotiate with the mainstream.
“We are focusing on the aruvani being a woman in day-to-day life, not just in front of the mirror at home,” says Sudha.
Bharathi Kannamma, an eunuch who edits a community journal, says the communication sessions seem to be addressing the problem.
“Earlier, when aruvanis were teased or harassed, they fought back often by shouting and using foul abuse. This created a bad impression in the minds of the general community,” she says.
Spreading awareness
A trainer, Rajakumari, says eunuchs are much more in control of their lives after attending the sessions.
“When people mock or tease them, they don’t take off in a rage as they understand that the public can be ignorant or insensitive,” she says.
There is more on the minds of the aruvanis than celebrating their yearly festival in the village of Koovagam in Tamil Nadu.
“We’re fighting for our right to live and work with dignity as other women do. The violence against transgender people must stop,” says Sudha’s friend Aruna, who marched along with 500 other transgender protesters.
“They lead many self-help groups working in Tamil Nadu, spreading awareness about safe sex and HIV to hundreds of transsexuals, many of whom are sex workers or beggars.”
Delhi-based historian activist Mario D’ Penha says there is a “huge debate” raging in the eunuch community “about the right path to integration and whether they should be seen as eunuchs or women”.
Not recognised as females by law, these castrated males face a very real identity crisis. Once their surgery has taken place they are no longer considered male and there is no legal framework in place to deal with them.
One of the most important aspects of the training is to impress upon the community the need for safe sex.
Since many of them are extremely vulnerable to HIV, given their social isolation and low literacy levels, short films, documentaries and modern parables are used to improve social skills and to highlight health issues, such as the need to use condoms.
“From living on the fringes of society, they are not only working towards ‘mainstreaming’ themselves, but are now focusing on expression of their hidden talents that can contribute to them being accepted as citizens in their own rights,” says Dr R Lakshmi Bai, chief of a local HIV prevention project.
Aruna is hopeful about the future.
“This is the way to go. We aruvanis have achieved in the past two years what was left undone in the past 20 years. Wait and see what young aruvanis can do.” 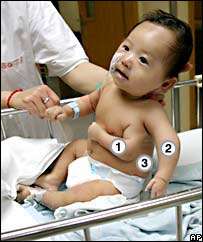