Delays in setting up Cambodia’s genocide trials have led to concern that the defendents will die off before being brought to trial, taking vital evidence to the grave.

Hundreds of Cambodians have paid their respects to Ta Mok, a former Khmer Rouge leader nicknamed “The Butcher”.In a traditional Buddhist funeral ceremony, incense was burned and prayers recited over Ta Mok’s body, which was daubed with white powder.
The ceremony took place in Ta Mok’s former stronghold of Anlong Veng, in the north of Cambodia.
Ta Mok, who died on Friday, was the regime’s military commander and linked to many atrocities of the 1970s.
About 1.7 million people died under the Khmer Rouge, through a combination of starvation, disease and execution.
Ta Mok was the only Khmer Rouge leader who refused to bargain with authorities following the collapse of the regime, and he was arrested in 1999 near the Thai border.[…]
Though Ta Mok was one of the most vicious leaders of the Khmer Rouge, he is remembered in this area as tough but generous – a man who brought public works projects and some employment to a poor region.
On Saturday, local people filed through the house to light incense and contribute money towards his funeral, as 11 Buddhist monks sat in attendance.
“He is the one who allowed me to survive,” a weeping Sarann Chanthy, 50, told the news agency AFP.
“When I heard the news that Ta Mok died, I was shocked and cried until I fainted,” she said. 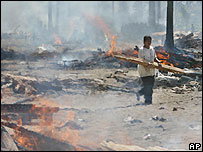