NAIROBI (Reuters) – A 73-year-old Kenyan grandfather reached into the mouth of an attacking leopard and tore out its tongue to kill it, authorities said Wednesday.
Peasant farmer Daniel M’Mburugu was tending to his potato and bean crops in a rural area near Mount Kenya when the leopard charged out of the long grass and leapt on him.
M’Mburugu had a machete in one hand but dropped that to thrust his fist down the leopard’s mouth. He gradually managed to pull out the animal’s tongue, leaving it in its death-throes.
“It let out a blood-curdling snarl that made the birds stop chirping,” he told the daily Standard newspaper of how the leopard came at him and knocked him over.
The leopard sank its teeth into the farmer’s wrist and mauled him with its claws. “A voice, which must have come from God, whispered to me to drop the panga (machete) and thrust my hand in its wide open mouth. I obeyed,” M’Mburugu said.
As the leopard was dying, a neighbor heard the screams and arrived to finish it off with a machete.
M’Mburugu was toasted as a hero in his village Kihato after the incident earlier this month. He was also given free hospital treatment by astonished local authorities.
“This guy is very lucky to be alive,” Kenya Wildlife Service official Connie Maina told Reuters, confirming details of the incident. 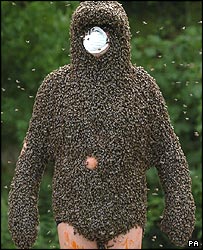