After months of the war going badly for the US and the new Iraqi government, officials got a nice plum today when they killed Abu Musab al-Zarqawi, the head of Al Quaida in Iraq. As might be expected, those that support the plans of the two governments cheered and fired rifles into the air to celebrate (generally a bad idea in populated areas) and those who were sympathetic to the cause of al-Zarqawi muttered under their breath and began to squabble about who is in charge of Iraq’s most well known secret organization.
Â Â Apparently, the US got a hot tip to follow al-Zarqawi’s personal cleric, Abu Abdul-Rahman al-IraqiÂ and when they saw him go into a house in Baghdad they dropped two five hundred pound bombs on it. According to the military, the house and everyone in it were obliterated. This included several women and children. I would say that al-Zarqawi looks pretty good for having been obliterated (actually Mink Hippie made comment about that this morning…here I am stealing her words.) Al Quaida in Iraq quickly released a press statement saying they would have revenge which was curiously signed by al-Zarqawi’s spiritual advisor ( al -Iraqi ) who is reported to have been killed in the house. In addition more than 40 people died throughout Iraq in what were thought to be retaliatory bombings.
Also curiously the bombing happened in the village of Habhib which it seems is known for producing an anise flavored liquor called Arak. I had thought there was a prohibition on alcohol among Muslims. And to further addÂ to my confusion the father of Nick Berg, the first American to be beheaded in Iraq, expressed no relief over the death of al-Zarqawi, even though it was al-Zarqawi who used a huge knife to cut off Nick Bergs head. In a very wierd statement the elder Berg saidÂ “Zarqawi felt my son’s breath on his hand as held the knife against his throat. Zarqawi had to look in his eyes when he did it. George Bush sits there glassy-eyed in his office with pieces of paper and condemns people to death. That to me is a real terrorist.”
This could have something to do with an election the elder Berg is hoping to win soon on an anti war stance. Incidentally, for those who don’t remember, Nick Berg wasÂ a man of questionable intelligenceÂ that transported himself illegally into Iraq and subsequently lost his head. He was not, as some websites have reported ‘a contractor.’
I reserve judgement on all of this…but have to admit that it is all damn interesting.
cd 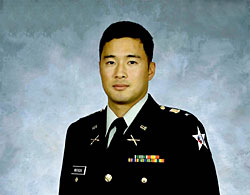