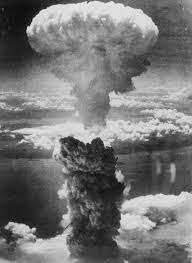 Gandhi, Bush, and the Bomb
by Lawrence S. Wittner
On February 24, at a press briefing, White House National Security Advisor Stephen Hadley announced that, when U.S. President George W. Bush travels to India next week, he will lay a wreath in honor of Mohandas Gandhi.
For those familiar with the cynical gestures of government officials, it might come as no surprise that an American President would attempt to derive whatever public relations benefits he can by linking himself to one of the most revered figures in Indian and world history.
But the level of hypocrisy is heightened when one recalls that Bush is currently one of the world’s leading warmakers and that Gandhi was one of the world’s leading advocates of nonviolence. Furthermore, the American President’s major purpose for traveling to India is to clinch a deal that will provide that nation with additional nuclear technology, thus enabling it to accelerate its development of nuclear weapons.
Gandhi, it should be noted, was not only a keen supporter of substituting nonviolent resistance for war, but a sharp critic of the Bomb. In 1946, he remarked: “I regard the employment of the atom bomb for the wholesale destruction of men, women, and children as the most diabolical use of science.” When he first learned of the atomic bombing of Hiroshima, Gandhi recalled, he said to himself: “Unless now the world adopts non-violence, it will spell certain suicide.” In 1947, Gandhi argued that “he who invented the atom bomb has committed the gravest sin in the world of science,” concluding once more: “The only weapon that can save the world is non-violence.” The Bomb, he said, “will not be destroyed by counter-bombs.” Indeed, “hatred can be overcome only by love.”

That is certainly an interesting backdrop against which to place President Bush’s plan to provide India with nuclear technology. India is one of only four countries that have refused to sign the nuclear Non-Proliferation Treaty (NPT)-a treaty endorsed by 188 nations. Thumbing its nose at the world, India has conducted nuclear tests and has developed what experts believe to be 50 to 100 nuclear weapons. Under the terms of the NPT, the export of nuclear technology is banned to nations that don’t accept international inspections of their nuclear programs. In addition, U.S. law prohibits the transfer of nuclear technology to a country that rejects full international safeguards. U.S. law also bans such technology transfer to a non-NPT country that has conducted nuclear test explosions.
Thus, if the President were to give any weight to Gandhi’s ideas, international treaty obligations, or U.S. law, he would not be working to provide India with the same nuclear-capable technology that he so vigorously condemns in Iran-a country, by the way, that has signed the NPT, has undergone inspections by the International Atomic Energy Agency, and has not conducted any nuclear weapons tests. There are other reasons to oppose this deal, as well. Although India’s relations with Pakistan are relatively stable at the moment, they might well be very adversely affected by any perception that the Indian government was racing ahead with a buildup of its nuclear arsenal. Furthermore, Pakistan might demand the same nuclear assistance as India. Indeed, if India can simply ignore the NPT and, then, receive nuclear technology from the United States, why should other countries observe its provisions? The Iranians, certainly, will make this point.
At home, the Bush administration’s double standard has not gone unnoticed. In Congress, Representatives Ed Markey (D-MA) and Fred Upton (R-MI) have introduced a bipartisan resolution-H.Con.Res. 318–expressing strong concern about the proposed U.S.-India nuclear deal. Although this resolution affirms humanitarian and scientific support for India, it contends that full civil nuclear cooperation between the two nations poses serious dangers. For example, it points to the possibility that the supply of nuclear fuel to India could free up India’s existing fissile material production, thereby enabling it to be used to expand India’s nuclear weapons arsenal. The resolution also opposes transfer of nuclear technology to any country that is not a party to the NPT and has not accepted full safeguards.
Whatever happens to this resolution, if the Bush administration were to implement its nuclear agreement with the Indian government, it would have to convince Congress to amend U.S. law. And arms control and disarmament groups are determined to prevent that from happening.
Thus, the Bush administration might genuflect to Gandhi in its efforts to arrange a nuclear pact with India, but it is going to have to convince a lot of very skeptical observers before it implements this agreement.
Dr. Lawrence Wittner is Professor of History at the State University of New York, Albany. His latest book is Toward Nuclear Abolition: A History of the World Nuclear Disarmament Movement, 1971 to the Present (Stanford University Press). He also serves on the Board of Directors of Peace Action, the country’s largest peace and disarmament organization with over 90,000 members. www.peace-action.org.