Florida is known as a place where everything is bigger and better - the theme park rides, the sports and certainly the food.

Florida is known as a place where everything is bigger and better – the theme park rides, the sports and certainly the food. If you’re the competitive type, why not check out some of the restaurants below, all of which offer unique challenges for the truly hungry.

Whether you’re on holiday with your kids or enjoying an intimate break, sweltering over the Inferno Soup at Nitally’s, chowing down a 48oz steak or eating ice cream from a kitchen sink, you’re sure to have a great story to take home with you whether you pass the test or not.

Launched by former NFL coach Don Shula in 1989, this restaurant chain quickly gained a reputation as one of the best places in Florida to sink your teeth into some prime Angus beef. Each restaurant is themed after the Miami Dolphins’ “Perfect Season” that Shula presided over in 1972, when the Dolphins became the only team in NFL history to finish the entire season undefeated.

Orlando holidays in Florida wouldn’t be complete without sampling their famous 48oz Porterhouse steak, dubbed “The Shula Cut”. Holidaymakers who manage to finish all of this titanic T-bone in one sitting are rewarded with induction into the restaurant’s 48oz Club, which would certainly provide a few bragging rights back home.

However, guests have their work cut out for them if they’re planning to beat the record of superfan Taft Parker, who to date has eaten over 175 of the giant steaks – earning a commemorative football from Don Shula himself for his achievement.

If you’ve got a taste for the spicy stuff, you may have finally met your match at Nitally’s Thai-Mexican restaurant in St Petersburg, Florida.

This challenge isn’t for the faint of heart: the Inferno Soup contains fresh ghost pepper. At over 400 times stronger than Tabasco sauce, it’s the hottest chili known to mankind – in fact, it’s so hot the Indian government has reportedly considered using it in non-lethal hand grenades.

For good measure, the restaurant throws about a dozen other varieties of pepper, including three kinds of jabanero, into the dish.

Challengers must be over 18, stone-cold sober and “of sound mind and health” before they can tackle the Inferno Soup Challenge, as well as remaining seated throughout. Any takers?

Poblano’s Restaurant in Clearwater, Florida is a local favourite among lovers of burritos, enchiladas and tequila. The truly adventurous, however, can put their guts to the test with the 20 Tacos in 40 Minutes challenge. The crispy fried tortillas filled with shredded beef, cheese and lettuce are a staple of Mexican cuisine, but it takes true grit to step up to the bar at Poblano’s and earn a place in the restaurant’s hall of fame.

The tacos are served ten at a time and diners are expected to clear their plates completely to succeed. If they do manage to chow down the full 20, the house pays for the meal and the challenger receives a T-shirt and has their photo mounted on the wall of the restaurant.

A word of warning, though – only 13 people have completed the challenge since it was launched a couple of years ago. Reigning champion Adam went above and beyond to finish an incredible 30 of the spicy snacks in the allotted time. 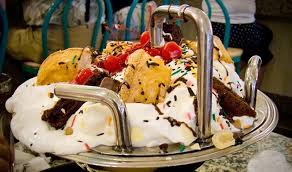 Americans love to round off a meal with a good ice cream sundae, and entering this classically-styled parlour in Dania Beach, Florida is like stepping back in time to the age of soda jerks, Cadillacs and rock ‘n’ roll. There’s also a dessert on the menu that’s a meal in itself and then some.

The Kitchen Sink isn’t just a clever name – it really is served in a full-size kitchen sink, plumbing and all. The servers behind the counter are invited to let their imaginations run wild putting everything they can think of into the colossal sundae, with toppings including marshmallow, chocolate, strawberries, cherries, fudge and sprinkles.

In this case there’s no reward for finishing the food besides the satisfaction of a job well done, but at $12.95 (£8) per person – for a minimum of four diners – it’s a whole lot of ice-cream for your cash.

If you’re a burger lover and you think you’ve seen it all, Eddie would have you believe otherwise. From the outside it may seem like just another waterfront burger joint in Dunedin, Florida, but it has achieved local fame thanks to one truly daunting menu item: the Monsta Burger.

Featuring 3lbs of beef created from six of the restaurant’s normal half-pounders and “all the fixin’s”, this colossal burger is even served with a pound of French fries on the side! Finish it all within 30 minutes and you’ll get a T-shirt and your picture on the Wall of Fame, as well as a free meal.

Fail, and it’ll set you back $24.99 (£16), but why not have a go at one of Eddie’s other challenges? The super-spicy Fire-in-the-Hole Chicken Wings will net you $100 (£64) in gift vouchers if you can chomp down 13 in 15 minutes, or alternatively there’s an enormous tray of nachos offering the same prize if you can finish it in half an hour.

Some Photos of Our Time in New York City

Some Photos of Our Time in New York City

Back in the USA – New York City is the World