In the words of Rick James…”Cocaine, it’s a hell of a drug…” 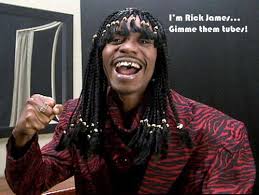 NEW YORK (Reuters) – A canned energy drink called “Cocaine” being sold in New York grocery stores has infuriated the city’s mayor who says its brand name celebrates the use of a dangerous drug.
“I think that the bottlers ought to have their heads examined given that we have drug problems (particularly) among kids, to try to glorify something that is so destructive is an outrage,” New York Mayor Michael Bloomberg told a news conference on Tuesday.
The high-caffeine drink, created by Las Vegas-based Redux Beverages, contains no cocaine, but markets itself as “the legal alternative” to the real thing.
It contains a mixture of legal stimulants like caffeine, guarana — a South American seed that is a natural source of caffeine — and taurine, an acidic chemical that occurs in the tissues of animals.
The drink, which carries a mock health warning saying it can result in “excess excitement, stamina, fun and possible feeling of euphoria,” has appeared on the shelves of at least five New York stores and the company uses a Web site to market cocktails containing the beverage.