It’s a good thing the animal rights lovers didn’t have dinner with me and Mink Hippie on my birthday. She took me to an incredible fukn sushi place that had me select a lobster and then to my surprise they pulled out a cleaver and killed it in front of us, pulled the meat out while the body was still wriggling, and then served it with lemon. It was the first time anyone ever had something killed for me to eat. It was also delicious.

ROME (Reuters) – An Italian restaurant was fined 688 euros ($855) for displaying live lobsters on ice to attract patrons, in an innovative application of an anti-cruelty law usually affecting to household pets.
A court in the northeastern city of Vicenza ruled the display was a form of abuse dooming the crustaceans to a slow death by suffocation.
“We’re appealing,” said Giuseppe Scalesia, who runs La Conchiglia D’Oro, or “Golden Shell,” restaurant along with his brother Camillo.
“They said that the lobsters, laying on the ice, suffer… They compared them in court to other animals, like cats and dogs.”
The case was brought by Gianpaolo Cecchetto, a former environmental activist, who took his two young children to the Vicenza restaurant in May 2002.
“They were shocked by the display,” Cecchetto told Reuters, adding he immediately got in touch with the ENPA national animal protection entity. “ENPA took care of the lawyers and legal proceedings.”
Italy has some of the world’s toughest animal rights laws. The city of Rome in October banned goldfish bowls, seen as cruel, while Turin passed a law last year that would fine dog owners 500 euros unless they walked their canine friends at least three times a day. 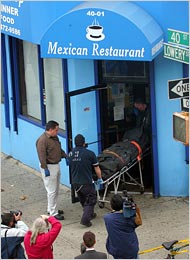