(I have a personal interest in Sierra Leone, which is struggling to get back on its feet after 10+ yrs of brutality. Political and economic instability in neighboring Guinea and Liberia threaten Sierra Leone’s recovery.
Here is a great update on the current situation in Liberia [see last week’s post on presidential candidate Ellen Johnson-Sirleaf]. -kg)

“Liberian politicians call people ‘the masses’ when they are still seeking their votes, but once they are elected, they will remove the ‘m’ from the masses and call them ‘the asses’,” says James Murray, a company messenger amidst the frantic election campaigning.
This scepticism of the political establishment stems from more than 150 years of chronic bad governance, corruption, ethnic exploitation – and an infrastructure and economy ruined by 14 years of civil war.
The guns may now be silent, and refugees returning to their homes following the 2003 peace deal which saw former President Charles Taylor exit to Nigeria and the arrival of some 15,000 United Nations peacekeepers, but Liberians are frustrated with their lot.
Monrovia has been without electricity and water for over a decade. There are tens of thousands of teenagers who have never seen electric light.
BBC NEWS | Africa | Focus shifts to Liberia’s recovery 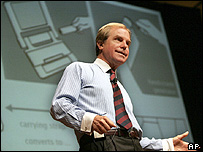