BBC NEWS | Entertainment | Zeppelin’s Page made Rio citizen
Led Zeppelin guitarist Jimmy Page has been made an honorary citizen of Brazilian city Rio de Janeiro for his work helping its street children.
The legendary rocker was presented the honour at Casa Jimmy (Jimmy’s House), which Page opened in 1998 and has so far supported more than 300 children.
“The greatest satisfaction…is knowing that I am able to help someone who needs help,” said Page at the ceremony.
The 61-year-old set up the project after a visit to the city in 1994.
He was in Rio – Brazil’s second largest city – to promote an album when fighting broke out between street gangs, sparking his interest in their plight. 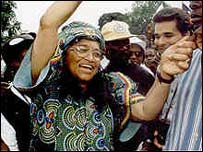