( A big fukn salute to all the Chris’s out there. I will try to post a new and noteworthy Chris each day…..cd) 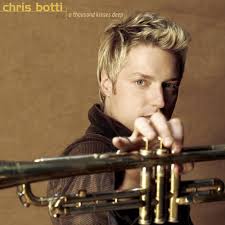 Chris Botti: Current toast of the jazz music scene
Trumpeter Chris Botti certainly is the current buzz of the jazz music scene. America’s queen of talk Oprah Winfrey couldn’t help but rave and heap praises on this gifted instrumentalist, talented composer and charismatic performer. People Magazine named him as one of “2004’s 50 Most Beautiful People.”

Since the release of his first solo album in 1995, Chris has created a series of recordings that have made him a virtual genre in the realm of contemporary jazz. Through a combination of lush atmospheres and thoughtful improvisation, he has earned both critical acclaim and mainstream appreciation.
On his latest collection, “When I Fall In Love,” the best–selling trumpet virtuoso expands the range of his earlier work with an album devoted to classic love songs, each one performed with Botti’s impeccable taste and signature tonal qualities.
Featuring guest vocal performances from Paula Cole (“What’ll I Do” and “How Love Should Be”) and Sting (“La Belle Dame Sans Regrets”), “When I Fall In Love” reunites Botti with legendary producer/musician Bobby Colomby, who helmed Botti’s 2002 seasonal collection, “December.” Botti is accompanied by the London Session Orchestra on all but one of the new album’s tracks and the result is a sultry sojourn into the very heart of romance. “When I Fall In Love” is mixed by the multiple Grammy–winning engineer Al Schmitt with arrangements by Jeremy Lubbock, Billy Childs and Gil Goldstein.
On his new album, Chris Botti breathes new soul and magic into classic pop penned by Irving Berlin (“What’ll I Do?”), Richard Rodgers and Lorenz Hart (“My Romance”), Ira and George Gershwin (“Someone To Watch Over Me”), Harold Arlen and Johnny Mercer (“One For My Baby” and “One For The Road”) and others.
“When I Fall In Love” also includes the contemporary standard, Sade’s “No Ordinary Love,” “Cinema Paradiso,” written by Ennio Morricone and Andrea Morricone and the centerpiece track, “Time to Say Goodbye (Con te Partiro),” a classically–inspired song that entered the public consciousness in 1997 with Andrea Bocelli’s hit version.
“When I Fall In Love” is available at your favorite record stores under Sony BMG Music Entertainment.