Now theres something about Chris Elliott that makes me say EWWWWW! I think it has a lot to do with his imagination….I bet this is good…..
cd

STLtoday – Entertainment – Books
Chris Elliott: author – now there’s something weird
By Jeff Daniel
One glance at that sly smile and you fully expect to be dragged – kicking and screaming, if need be – into a path of swirling absurdity. But it doesn’t happen. Because Chris Elliott the performer has fashioned a career portraying weirdos and oddballs, there’s really only way to describe the normalcy one encounters with the real Chris Elliott: weirdly odd. Or, if you prefer, oddly weird. Take your pick.
So, on a recent afternoon in a downtown hotel lobby, Elliott is just your average nice guy sharing a cup of coffee and some conversation. That dark and twisted side that often pops up in the comedian’s performances? Nowhere to be found. Elliott comes across as so grounded and down-to-earth that he might easily be mistaken for a bag of potting soil.
If the bag of potting soil were sharp and witty and talented, that is. And if the bag were traveling around the country promoting a laugh-out-loud funny novel about a 19th-century serial killer. A murderous tale filled with laughs? Now there’s the off-kilter Elliott that audiences will surely recognize.
In fact, “The Shroud of the Thwacker” brims with the sublime silliness that one would expect in a historical crime thriller borne from this mind, the same one that brought the world a bizarre film such as “Cabin Boy” and a cutting-edge TV show such as “Get a Life.” Characters in “Shroud” include a flatulent Teddy Roosevelt, a news reporter named Liz Smith and the author himself. There’s time travel, historical detail (some real, some not) and enough strangeness to propel a twisting plot into a full-length novel.
Advertisement
Well, a novel that’s kind of sort of a novel. More like a parody of those penned by Patricia Cornwell, Caleb Carr and Jack Finney. Or maybe even something more than that.
“The idea behind this book is that it’s not just a parody of that genre,” Elliott says. “Everything I do is actually a parody of me doing it. It’s funny to read reviews that take the book at face value as a novel. I mean, it is that, and I guess it works like that. But it’s more like: ‘Hey, here’s Chris Elliott’s attempt at his first novel. Here’s what he would come up with.'”
This isn’t the first go round in the literature world for Elliott, 45. Back in 1989, he and his father Bob Elliott (half of the influential comedy team Bob and Ray) co-authored a “Mommie Dearest” parody titled “Daddy’s Boy: A Son’s Shocking Account of Life with a Famous Father.” He is currently working on yet another satirical tale, this one about a trip up Mount Everest with a group of celebrities. Expect things to go horribly wrong – but in a funny kind of way.
On the subject of things going horribly wrong, that’s how Elliott describes one of his greatest regrets: his ill-fated season as a featured player on “Saturday Night Live” (1994-95). It was an instance where his axiom of “everything I do is actually a parody of me doing it” just didn’t fly.
“I did the show because deep down I always wanted to try it,” he says of his time on “SNL.” “People were always telling me it was the perfect place for me, but it wasn’t at all. Like I said about the book, how it’s a parody of me doing things, I just couldn’t do that there. I tried to break the fourth wall, and it may have worked a couple of times. But it worked so much better on Letterman.”
It was on “Late Night with David Letterman” that Elliott honed his surreal sense of humor and first reached a national audience. The young upstart, hired as a gofer for $200 a week, worked his way on to the very first show by donning a pair of lederhosen. Most important, he made the host laugh. His strange brew of characters – the most famous being the Guy Under the Seats – immediately became a “Late Night” fixture. (Elliott also met his wife on the Letterman set. The couple have two teenage daughters.)
“On ‘Letterman’ there was this whole other level of reality,” he says. “I wasn’t an actor playing a deranged staff member. I WAS a deranged staff member.”
Although he’s reached mainstream audiences with films such as “There’s Something About Mary” and “Groundhog Day,” as well as through his recurring role on “Everybody Loves Raymond,” Elliott has developed and maintained something of a cult status over the years. He seems both thrilled and somewhat shocked that “Get a Life” (1990-92) and “Cabin Boy” (1994) have enjoyed a recent resurgence. The former, a Fox sitcom that starred Elliott as a thirtysomething paper boy, is scheduled for DVD release early next year. The latter, a kind of Dadaist high-seas adventure comedy assailed by most critics, recently drew audiences in the 400 range when Elliott appeared for screenings in Boston and New York.
“I’ve always stood by ‘Cabin Boy,'” he declares with a sense of pride. “It was weird, but it was supposed to be weird. I guess I’ve never understood why it was so vilified when it first came out.”
Along with writing his Mount Everest tome, Elliott currently has a sitcom in an early development stage. He has another “Scary Movie” role in the can. And if things ever start to slow down? Well, there’s something to be said for playing life’s oddball next-door neighbors and creepy co-workers.
“You don’t have to worry about the ratings or reviews,” Elliott says with a laugh. “You just come out and do your scene. There always seems to be work for the weird brother-in-law.”
By Chris Elliott,
Miramax/Hyperion,
368 pages, $22.95
jdaniel@post-dispatch.com 314-340-8399 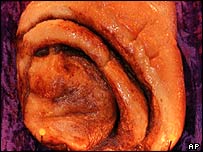