It doesn’t just happen in the third world……. This quote from the article struck me “Most of the world’s great despots at some stage claimed that God chose them,” Ugandan commentator Alan Tacca wrote.
cd 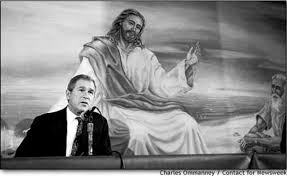 KAMPALA (Reuters) – Hundreds of born-again Christians drop their Bibles and begin singing songs hailing Uganda’s long-serving President Yoweri Museveni.
A pastor tells them he will only bless those who vote for the former rebel leader, and compares Museveni’s rivals in Thursday’s election to half-cooked food not ready to be served.
“If you deceive me and do not vote for Museveni, I will pray that you suffer,” he tells the two-day prayer meeting in Kampala, before leading a chorus of “Museveni tajja genda” (“Museveni won’t go” in the local Luganda tongue).

Outspoken religious leaders have weighed unashamedly into Thursday’s polls — the first multi-party ballot for 25 years in one of the world’s most Christian nations.
Another pastor, Robert Kayanja, head of the country’s biggest born-again church, prophesied that the next president would win 61.8 percent of votes, two candidates would pull out, and a third would die.
All five candidates seeking the key to State House have been hunting the Christian vote, but Museveni is leading the fastest-growing group: evangelical born-again churches.
Part of the reason is his wife Janet, who is a heroine to many in the movement. She has led a recent abstinence drive against HIV/ AIDS, infuriating many who believe its previous successes were based on condoms and education about the disease.
Janet, who is standing for parliament for the first time, has cited divine instruction for her candidacy and told a local newspaper she was acting on orders from above.
So is the only independent candidate challenging her husband, Abed Bwanika, as well as Peter Sematimba, a radio station boss and evangelical pastor running for Kampala mayor.
HUGE ROLE
In a nation whose memories include violence between Protestant and Catholic converts in the 1890s as Western missionaries left their mark, religion still has a huge role.
Most meetings, including one for hundreds of slightly bemused foreign election observers this week, begin with prayers. Museveni’s final rally for about 30,000 supporters at a city airfield on Tuesday began with a Bible reading.
About two-thirds of Uganda’s 27 million people are Christians, followed by Muslims and followers of animist, or traditional, beliefs.
It is hard to gauge how many Ugandan voters are born-again, but observers say they have political clout because they are much more vocal than other religious groups.
Ugandan evangelical churches have led loud campaigns against condoms and pornography in recent months, and 62-year-old Museveni is overwhelmingly their favorite.
He is also popular with conservative Christians in the United States. Last year he toured Uganda with a U.S evangelical television crew, who made a program, “To Uganda With Love,” about the nation’s blood-soaked past, and Museveni’s rise to power — hailing him as a gift from God.
Critics accuse Museveni of becoming increasingly autocratic after two decades in power, and worry some religious leaders are fuelling the former rebel’s hunger to stay there.
“Most of the world’s great despots at some stage claimed that God chose them,” Ugandan commentator Alan Tacca wrote. “If we do not debunk and demystify the pastors in good time, they already seem poised to join (Museveni) in the crusade against a free society.”