I guess bartenders have always done more psychotherapy than psychologists….

A bar in eastern China has come up with a novel way of attracting clients – they are allowed to beat up the staff.
The Rising Sun Anger Release Bar in Nanjing lets customers smash glasses, rant and even hit specially trained workers, state media reported.

The owner, Wu Gong, told China Daily that he was inspired to open the bar by his experiences as a migrant worker.
Most of his customers were women working in the service or entertainment industries, he said.
The bar employs 20 men who have been given protective gear and physical training to prepare them for the job.
Clients can ask the men to dress as the character they wish to attack.
Passers-by were divided on the idea.
“Pressure in today’s society comes from just about anywhere, from family or from work, from your boss or your girlfriend. We get no place to vent anger,” said salesman Chen Liang.
“The idea of beating someone decorated as your boss seems attractive.”
But another man, Liu Yuanyuan, said violence was not the answer.
“If people really feel angry, they should adjust their lifestyles or seek psychological treatment,” he told the daily.
But Mr Wu can meet that need, too. For the most stressed-out cases, counselling is available from psychology students recruited from local universities. 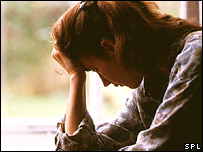