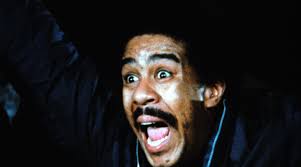 U.S. performer Richard Pryor, who helped revolutionize comedy with his profanity-laced and highly confessional social commentaries, has died at age 65 after long illness.
Pryor’s wife and business associates said he died in a California hospital on Saturday following a heart attack. Since 1986, he had been battling multiple sclerosis, a degenerative disease that forced him to quit performing in 1997 and had robbed him of his ability to speak by 2004.
Richard Pryor, shown in 1998, pioneered a highly personal and deeply raunchy kind of social commentary in his stand-up routines. (AP)
Pryor broke many barriers for black performers during his heyday in the 1970s and 1980s, becoming one of the highest-paid actors in Hollywood.
He appeared in a number of mainstream films but likely wielded the most influence as a stand-up comedian, transforming the genre with social commentaries that were often shockingly personal and deeply raunchy.
He’s credited with breaking the trail for a generation of comedians, including Robin Williams, Eddie Murphy, Arsenio Hall, David Letterman, Dave Chappelle and Chris Rock.
Williams said Pryor had a profound impact on him, helping him understand that no subject need be taboo.
“He just made me realize that in order to do it, you just got to keep taking chances with it,” Williams said.
“He said anything is available and that’s what he was always about. I’m talking about really painful things, I mean, deeply so – even Freud would say, ‘You shouldn’t go there.'”
Director Spike Lee, who often examines racial and social tensions in his films, said Pryor inspired other comedians, actors and artists – including Lee himself – to tackle social issues.
“He was a trailblazer, and the way he showed social commentary in his humour opened up a universe for other comics to follow in his footsteps,” Lee told CNN. “It’s a great loss.”
Born in Peoria, Ill., in December 1940, Pryor had a grandmother who owned a string of brothels and his mother was a prostitute. He drew part of the inspiration for his act from the pimps and other characters he met at the brothel, he said.
Pryor often focused on race relations in his stand-up routines, which he peppered with profanities.
He said in his autobiography, Pryor Convictions, that he tried to co-opt a racial epithet by using it.
Pryor, who battled drug and alcohol addiction for years, often took the tragic events in his life and made them a part of his concert movies and recordings.
This included a 1980 fire that nearly killed him. He had doused himself with cognac and then ignited himself while free-basing cocaine, then later said it was a suicide attempt.
Pryor famously incorporated it into his routine, joking that setting oneself on fire “sobers you up pretty fast.”
“You can do anything you want and you can say anything that comes to mind, just so long as it’s funny,” he said.
Pryor won a number of Grammy awards for his comedy recordings, which included 1971’s Richard Pryor: Live & Smokin’, Richard Pryor: Wanted: Live In Concert (1979) and Richard Pryor: Live on the Sunset Strip (1982).
He appeared in about 40 films, including Lady Sings the Blues, The Mack, Uptown Saturday Night, Silver Streak, Which Way Is Up?, Car Wash, The Toy, Superman III and Stir Crazy.
He also co-wrote the 1974 Mel Brooks comedy Blazing Saddles but was passed over for the lead role because of the controversy generated by his comedy routines.
In 1998, Pryor won the inaugural Mark Twain Prize for American Humor from the John F. Kennedy Center for the Performing Arts.
Among other kudos, in 2004, the television network Comedy Central voted him the top stand-up comedian of all time.
Pryor married seven times, although he only had five wives in total because he married two women two times.
He is survived by his wife, Jennifer Lee, and seven children.